A Moment for Chubby Love

Unless applied to the S&S yawl Chubasco that helped shape the face of yachting as we know it on the California coast. South. North. Yonder to Honolulu. Chubasco was launched in 1939 and honored on Wednesday night with a model—begun nearly half a century ago, completed at last—donated to the Newport Harbor Yacht Club. The full-sized version has carried NHYC’s burgee, very well, since 1958. 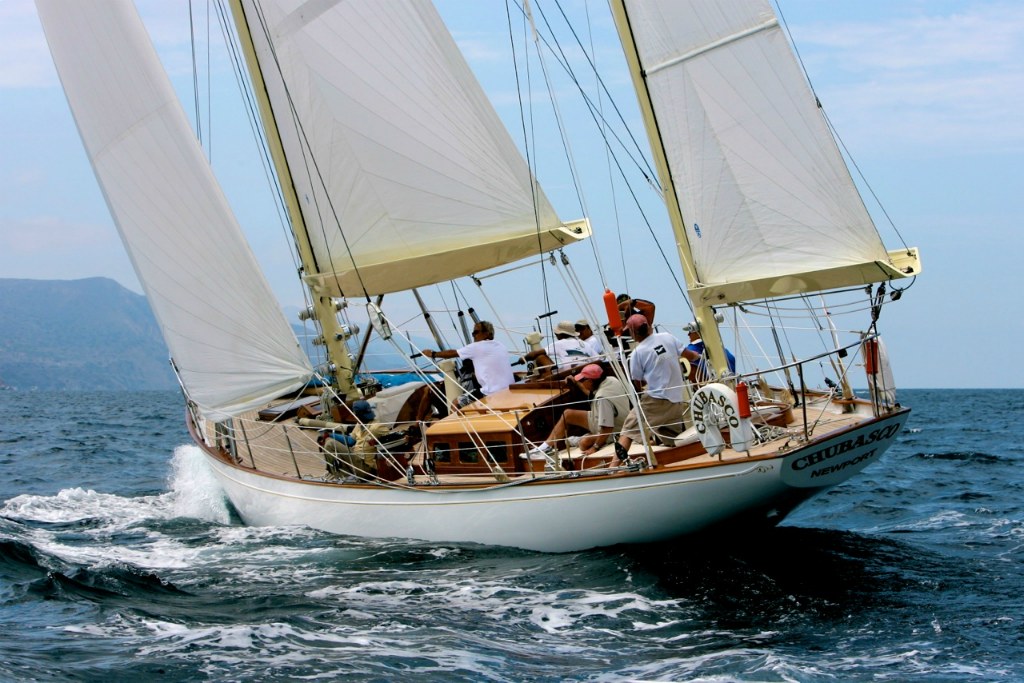 Along with one other vintage yacht, Odyssey, Chubasco reigns over Newport Harbor by dint of time, accomplishment, and, shall we say, quite the right bone structure, my dears.

Where to begin, the model: 0ccasional Chubasco crewman Russ Nash began carving wood long ago as a wedding present for his beloved Cathie (honest, ladies, the model was Cathie’s idea; she’s a Chubasco believer) but died before completing it. Russ’s widow became famously the longtime secretary of the Transpacific Yacht Club, and about a year ago the stars lined up to finish the replica as an exemplar of the West Coast heritage.

Where to begin, the boat: Union Oil heir William L. Stewart, Jr. commissioned the design from Sparkman & Stephens. Chubasco was launched from the Wilmington Boat Works for the ’39 Transpac, but it was in the post-WWII revival race of 1947 that she took first-to-finish honors. Add 13 years and we find her journeying north to San Francisco Bay to race against the local fleet, including boats of similar ilk and remarkable repute: Baruna, Bolero, Ocean Queen, and so on. But Chubasco was representing Southern California in Northern California waters, and that was the start of something. St. Francis Yacht Club’s 1975 commodore and now club historian, R.C. Keefe—the man most responsible for building, from this beginning, what is now the Rolex Big Boat Series— says the cross-pollination was critical. It would otherwise have been a local regatta: “If Chubasco had not come to San Francisco Bay to race, who knows?”

We do know that Chubasco is entered to compete starting Friday at Long Point Race Week, a who’s who event that she won in 2007 with a crew of longterm loyalists. That’s always been her style. It’s not an easy boat to get aboard, and it’s still not an easy boat to beat. (And never having been aboard, myself, I won’t be so familiar as to be calling her Chubby, the way the old hands do.)

In identifying Chubasco’s role in shaping California yachting, we shouldn’t neglect to say that under her second owners, the late Arnold Haskell and his nephew Don—the Don Haskell of international yacht brokerage Ardell—Chubasco also raced on the East Coast, in the Caribbean and in the Med. But this is home. Chubasco arrived in the Haskell family in 1958, the year that Ardell was founded. Arnold, with Don as skipper, entered her in the next three Transpacs. Three of her ’59 Transpac crew—they finished first in Class B and second overall—will be aboard for Long Point Race Week 2011: Craig Cadwalader, skipper, Fred Smales and Dick Deaver. Yep, that Dick Deaver, called forth from the security of his motorhome which, he purports, “has never dragged anchor.” (Don Haskell will sit out the regatta for reasons of health.) Here they are arriving at Diamond Head . . . 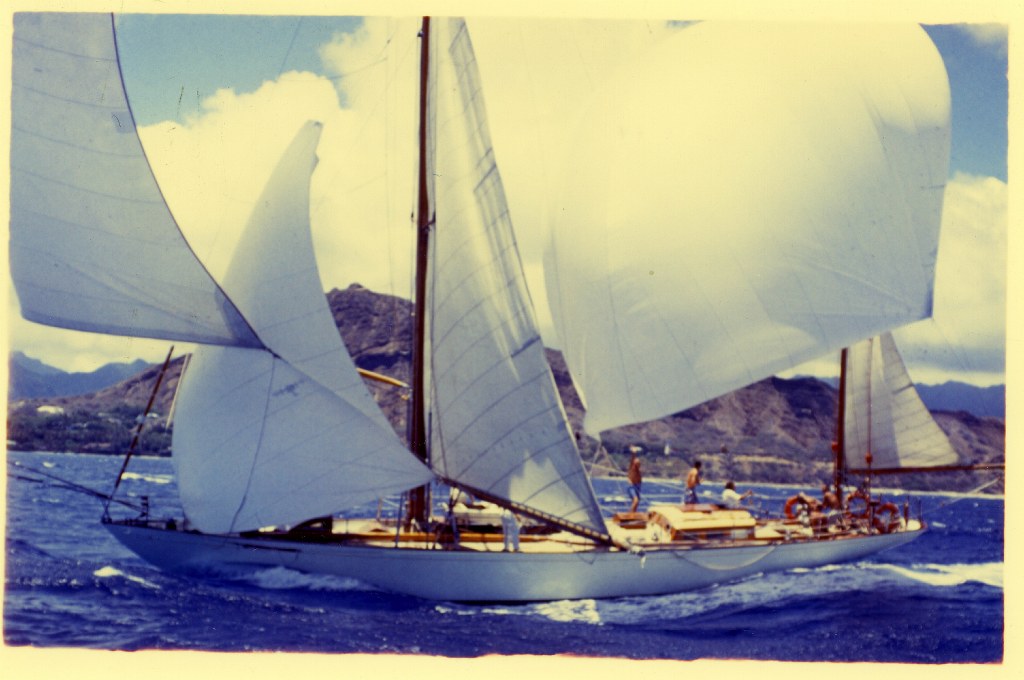 A few more thoughts about the model: “Dad was a model maker for an engineering firm,” Mike Nash says today. “Boat models were a spare time passion, and he built models only for people he liked. Very detailed models, down to having threaded turnbuckles made of gold. He consulted with jewelers on how to do these things. His model of Odyssey has a working rudder and wheel, connected by shaft and bearings. Dad sailed on Chubasco a little bit, and I think he did a Jamaica race on the boat, but he was really a Nalu guy, a Kialoa guy. He had a model of Kialoa II all-but finished when he died, and I’m pretty sure that Jim Kilroy is a man used to getting his way. But, when Jim came to the house to make payment and collect his model, my mom left him standing in the door, check in hand, letting him know that the model was too important to her and to her young son to let it go. Kialoa II has had a prominent place in our house ever since.”

The Chubasco model was carved and lacquered, with the deck laid and a cabin house built, when Russ Nash lost his life to lung cancer in 1972.

All these years it sat, valued but unfinished. Then came Brad Avery’s 2010 year as Commodore of Newport Harbor Yacht Club, and around him a group that wanted to see the club expand its collection of full models. When asked, Cathie Nash easily agreed to donate the partly-finished Chubasco model, and Don Haskell easily agreed to cover the cost of having it finished at Kenny Gardner’s shop. The rest of the story, of the model, tells itself.

The story of Chubasco herself is still being written on the water.

It’s a short week. You got a problem with that?

Chubasco will be up against the best that Southern California has to offer. Transpac 2011 winner Grand Illusion, for example, along with some of the hottest of the other sleds. Racing is focused on California’s favorite island, with a mindset that is light to moderate on competition, heavy on spirit. Friday’s race takes you from Newport Beach to Catalina, in time to party. I sailed in 2010 aboard Magnitude 80 (in her original, cant-keeled configuration) and we went off the line in that grayed-out southerly that so often shows up early, before the seabreeze kicks in and the breeze clicks right . . . 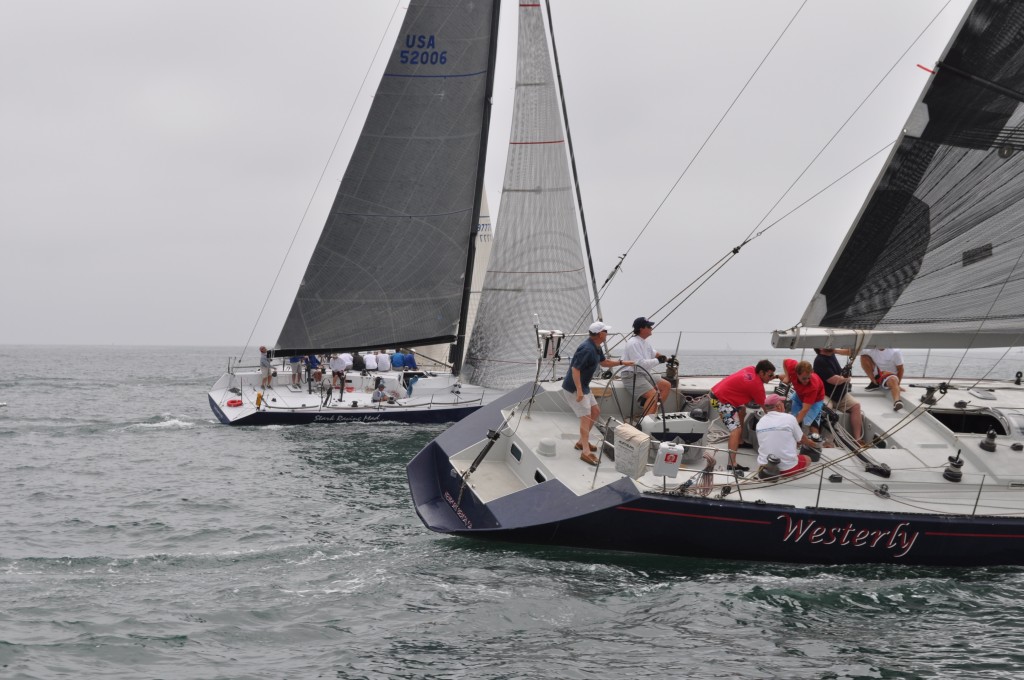 Saturday’s race (assuming someone wakes you up in time to race) takes you up the face of the island and back along a spectacular route of high cliffs, blue water, and waving kelp. The astute among you will notice the sun was out. Magnitude at the time was being raced in the name of the Orange Coast College School of Sailing and Seamanship . . . 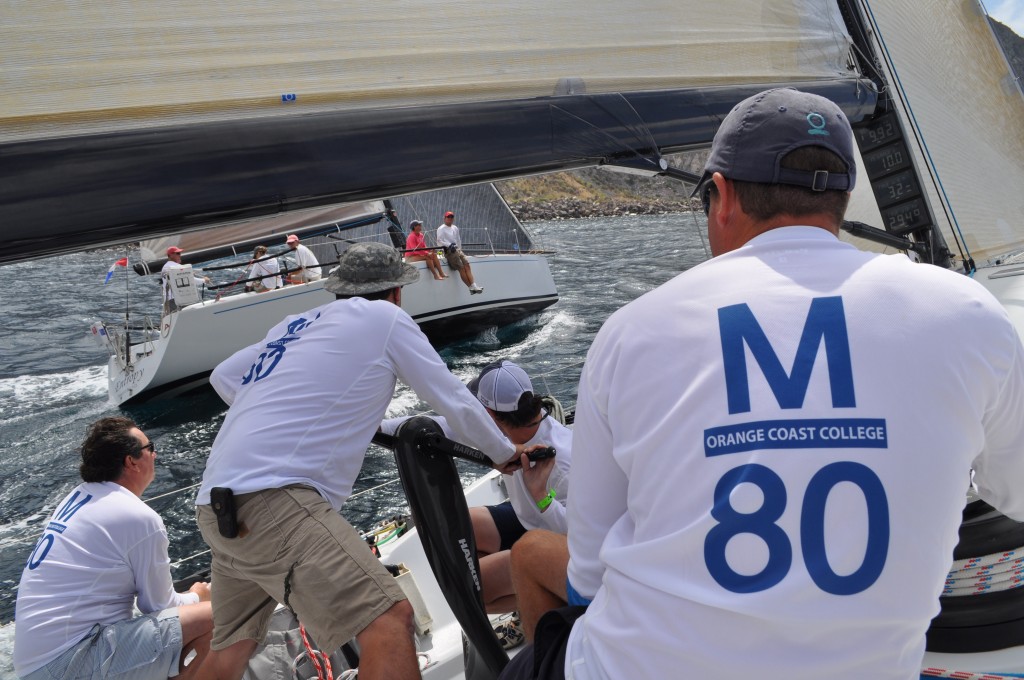 The short race returned us in time to party boat-to-boat. I’m figuring that Sea Diamond makes a lovely mothership for Ragtime . . . 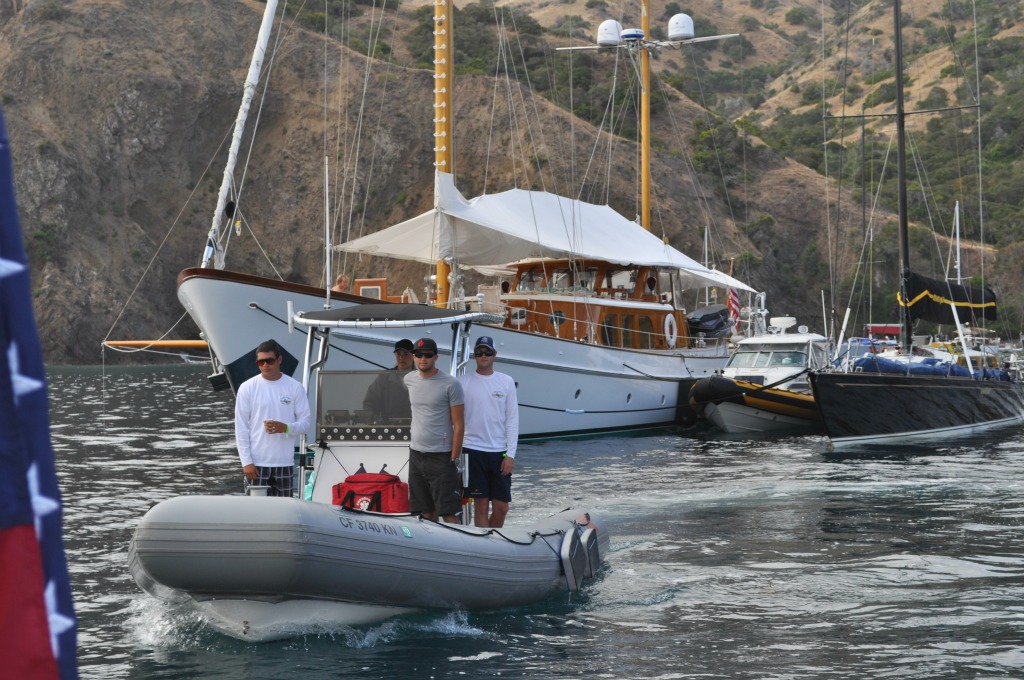 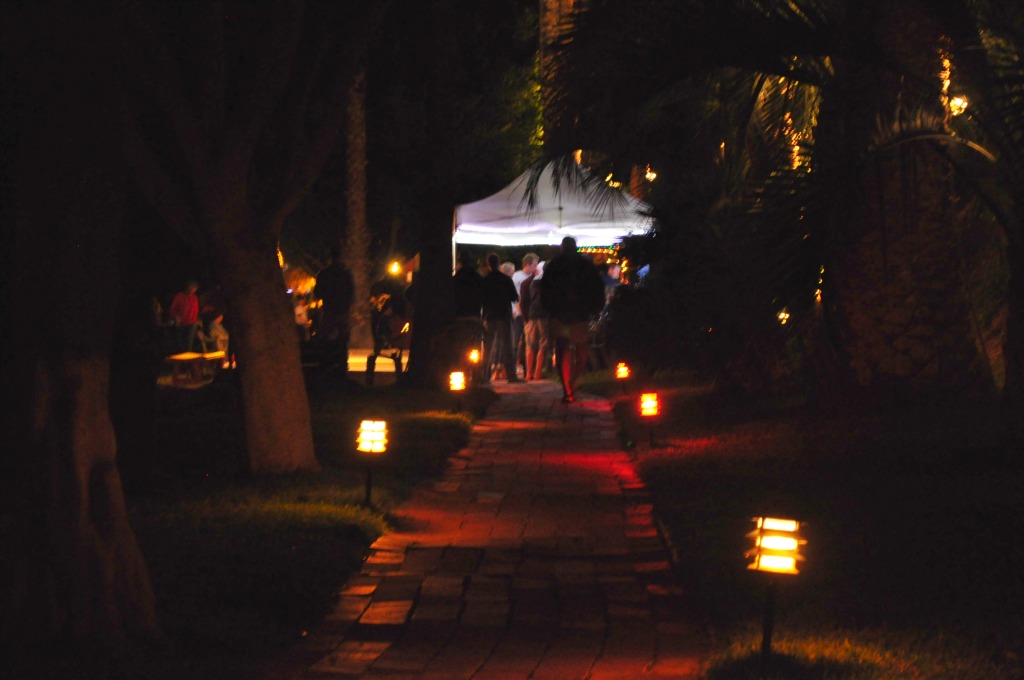 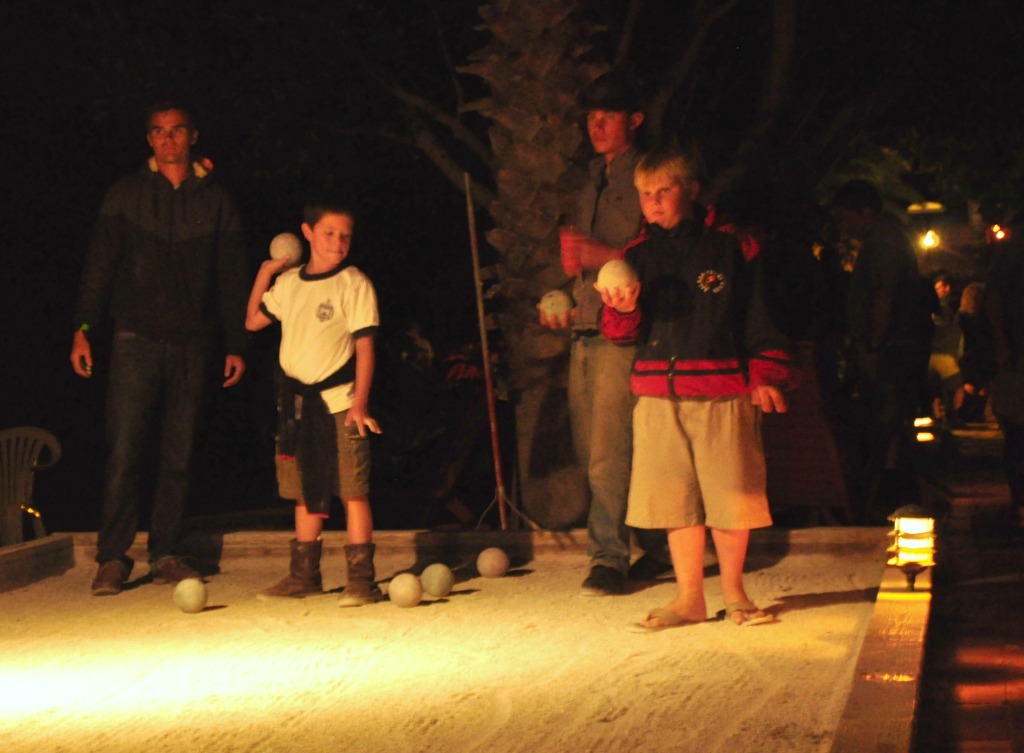 And who among us can guess the identity of the famous designer (hint, Ganbare) whose hand is holding the camera here . . . 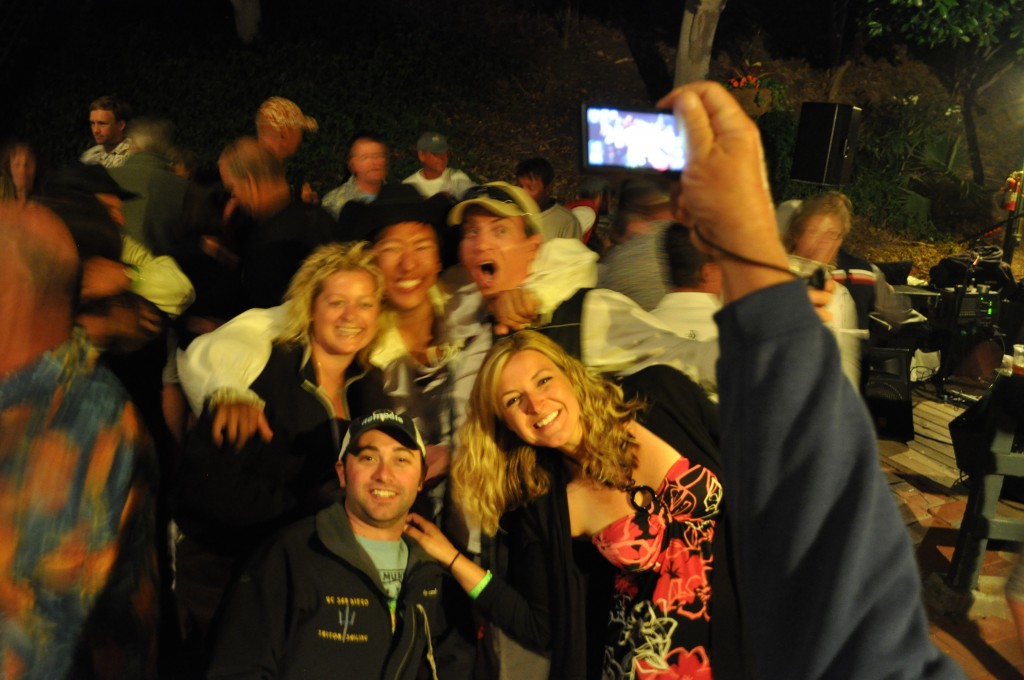 Sunday’s race takes you home, and that’s the sad part, as I wrote in SAIL. You have to leave this . . . 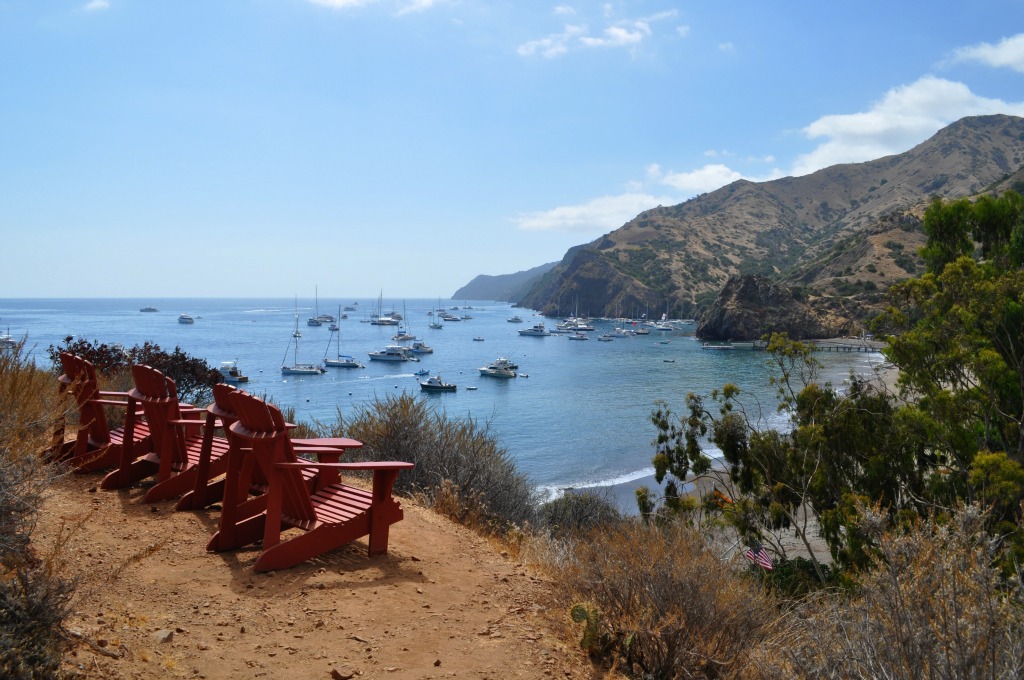 Then again, you get to do this, right, Sam ? 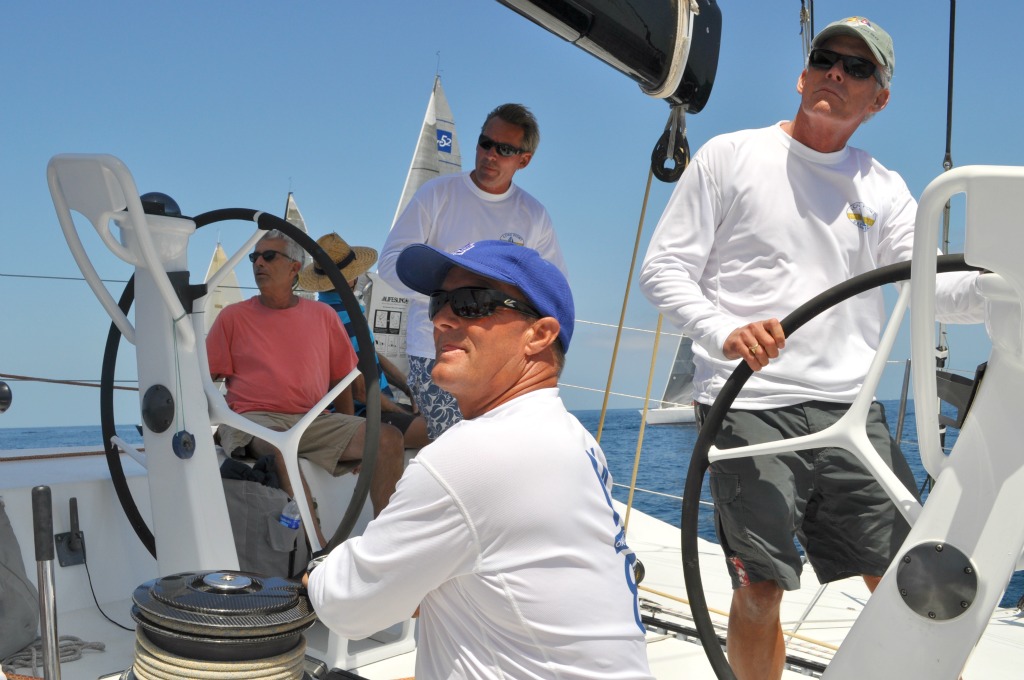 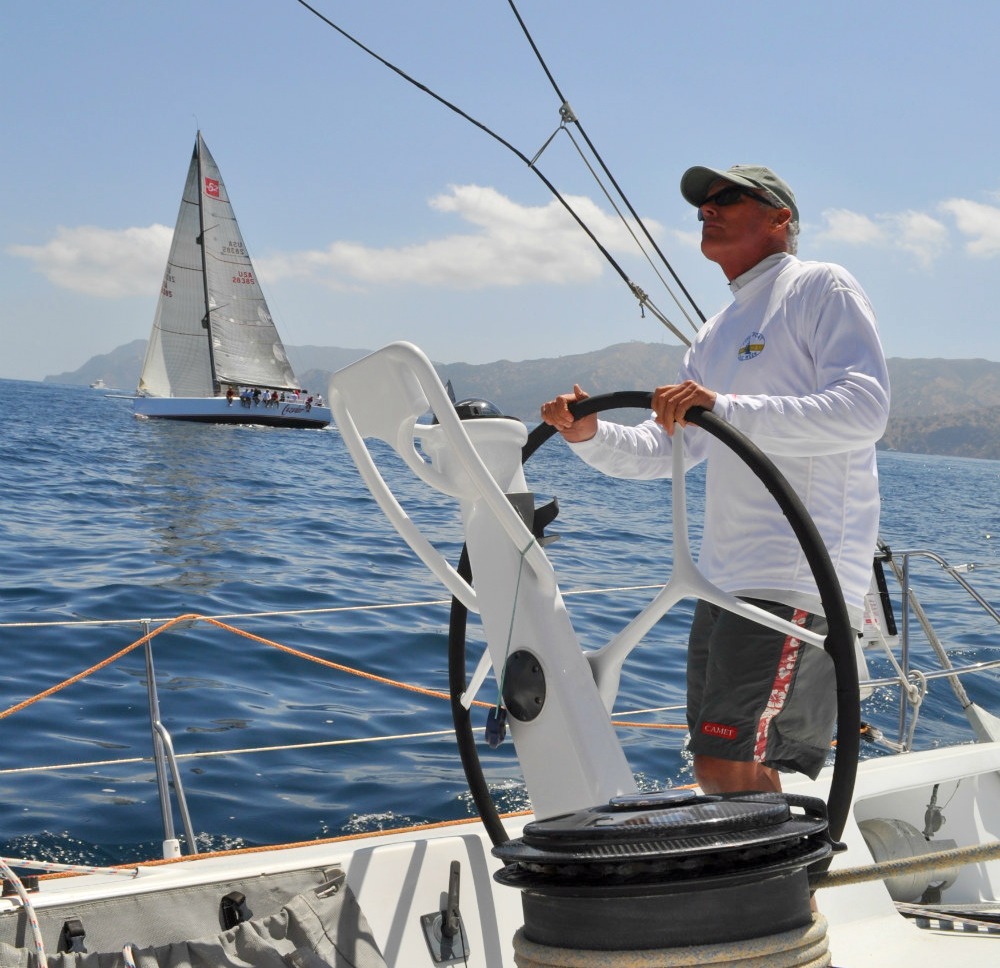 A little background: Once upon a time, Balboa Yacht Club ran its end-of-summer regatta as a two-day affair, racing out to Catalina on Saturday and home on Sunday, but that was so Twentieth Century. Nobody got much island time, and island time being much-valued, a new idea dawned along with a new millennium. Expansion. Three days, not two. Two clubs, not one Invited to the party, Newport Harbor Yacht Club got on board in a hurry. These outfits share the same harbor in Orange County, on the mainland, and they maintain leaseholds two shakes apart on the island, hard by aptly-named Long Point. NHYC now hosts a Friday night party. The Saturday race is a featured event, and Balboa YC hosts the celebration that follows. In each case, the club’s footprint on shore is small, limiting the regatta to about forty boats.

A little background: Most of the clubs in Southern California lease moorings and a beachhead at Catalina, which becomes a compelling feature of membership. But no one gets a big chunk of the island. Some 88 percent of the land belongs to the Catalina Conservancy, which aims to balance three goals: Conservation, education and recreation. Conservation comes first, because conservation comes first.

In spite of or perhaps because of the limitations, Long Point quickly became the regatta that everybody wants to sail, and the race committee by and by decided to invite selected boats from outside the two clubs, to really pay it off. But they’ve stuck close to that fortyish-boat limit, so getting the invitation might be the most competitive part of the whole deal. Hard-core racers love this one because it’s hard to win, but there’s not the brouhaha of a “major” regatta. “The races start at a gentlemanly hour,” Andy Rose says, “so you have your morning swim and catch up with your friends. Your best friends. This is a who’s who for Southern California.”

The Aldo Alessio Regatta on the same dates on San Francisco Bay and the nearby ocean is something of a who’s who for Northern California, with this appreciable difference: If anybody goes swimming at the Alessio, it won’t be on purpose. I walked down the street circa 1730 on Thursday and snapped a record of the start of Thursday’s Ronstan Bridge to Bridge Race . . . 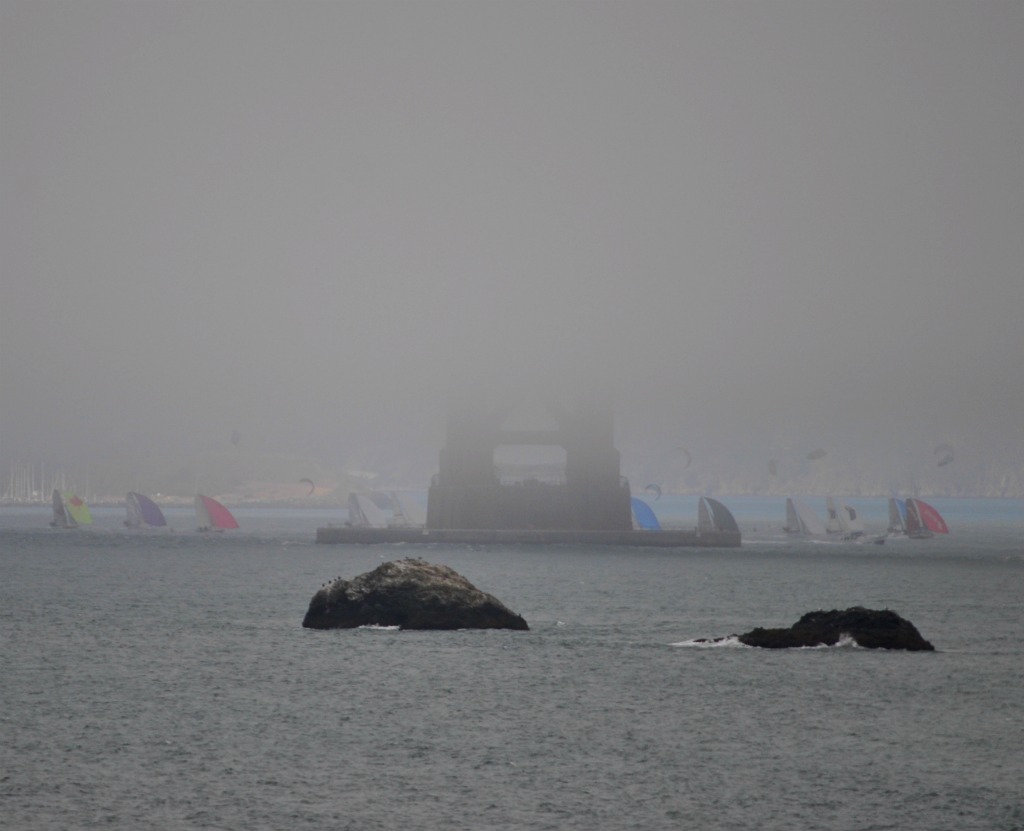 For you unlocals, the camera is looking into San Francisco Bay from Baker Beach, on the Golden Gate Strait. The big thing in the picture, disappearing up into the mist, is the South Tower of the Golden Gate Bridge. The racers are kites, windsurfers and 18-foot skiffs in one of the wilder annual undertakings here in the Wild West. Contestants line up all together, just west of the bridge and make one big bull run for a finish line, 7.5 miles downwind at the Bay Bridge and g’bless the faint of heart because this is not for the faint of heart. As to the look of things, yes, skies are brighter in the distance. For those of us who live out here, this is called, “a view of the sun.” We have our golden days,and we have our silver days.