They came off the water frigid but thrilled, four high-school winners of a contest to design a student pavilion for an America’s Cup Village, four kids who got lucky enough to be in the way when America’s Cup Organizing Committee cofounder Peter Stoneberg offered to spice up the contest by taking the winners for a ride on his 40-foot cat. Shadow leaves one fast-moving shadow, and we got the boatride in just in time, while I could still bill it as “the fastest cat on San Francisco Bay.” 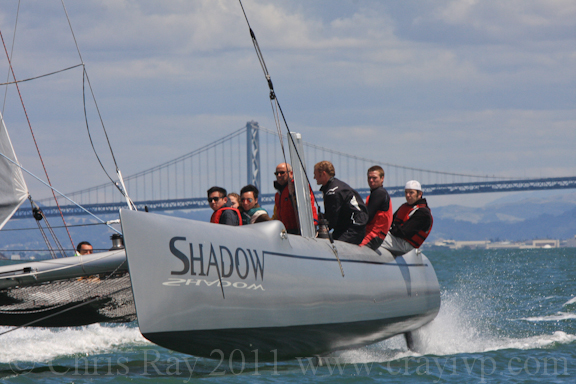 With Oracle’s two AC45s due to sail on Monday, Shadow will lose that billing in a hurry, but such details mattered not as boat and crew went screaming across the Alcatraz Channel. There was Cole Skaggs of Lowell High School, headed for Cornell’s architecture program in the fall, overall winner of the Architectural Foundation of San Francisco‘s annual high school design contest, and no rookie. “I’ve done the contest three times now,” Cole said, “but this is the first time there was more to it than just the contest itself.” In the follow-up, the man had a firm handshake and thank you, but not much time to talk: “I leave in two days for a 550-mile bike ride, the SF AIDS Life Cycle, but I can assure you I had some of the most fun I’ve ever had.”

There was Eagle Scout Matthew Lew, also from Lowell and the winner of a summer internship in the design department of the America’s Cup Event Authority. So Matthew, was it what you expected? “Not at all. Then again, I had no idea what to expect.”

Add Sean Gowin, also from Lowell, and Mohammad Eid from the Academy of Arts and Sciences/Build SF (schoolmate/winner Erina Yamada was on a plane for Japan), and there you have our lot, almost. Perhaps luckiest of all was Mara Woods-Robin, student reporter from Lowell, who drew the assignment.

I’ve had a few lucky assignments in my life, so I can relate. 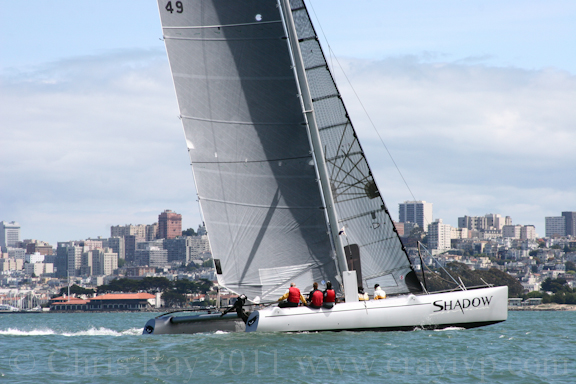 Under the Golden Gate Bridge, out to the edge of the wilderness, back under the bridge, over to the warmth of Marin and a wind hole off Belvedere, back out into the breeze, a boat like Shadow covers a lot of ground. Most lifelong sailors have never had such a ride. I was chasing at the helm of Stoneberg’s Protector and hangin’ on and trying to give Chris Ray a stable platform for his camera.

Heh. Good luck with that.

But it turned out that having so much human ballast aboard made the boat too stable, and the rig was being stressed, so the jib came down, and the crew of Peter (“a little hairy at times but a great time”) Stoneberg, Andy McCormick, Kyle Gundersen, and Dan Morris—because of the circumstances, they had never been going full throttle—backed off a bit more. But the ride was still plenty fast. 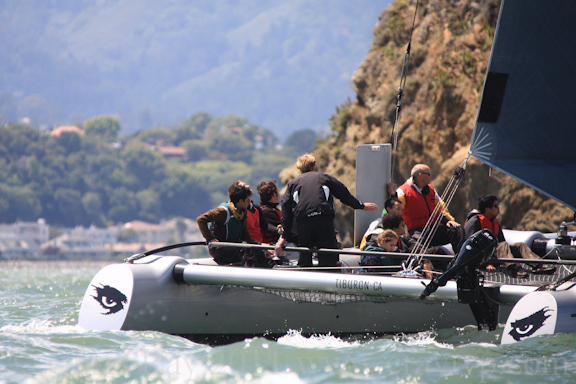 Now Mohammad, I warned and rewarned everybody ahead of time to dress for cold, and here you are stepping off the boat with an icicle for a body, and what was the best part? Or I guess I should say, was there a best part to your sail? “Oh yeah, when half the boat gets up in the air, that’s the best. What do you call that? [Flying a hull] Yeah, flying a hull. And it was pretty cool to lie on the netting and watch the water streak by so close you could almost touch it.”

Hmm, have we made a sailor here? Mohammad, tell us what you really think.

Then we told them, yep, Peter did flip that thing once.

Two days after this incredible act of generosity, which should have earned Karma points big-time, Peter Stoneberg’s Shadow—pushing hard this time for sure—stuffed and pitchpoled at 20+ and broke its mast in the mud en route to Stockton in the Delta Ditch Run. The way I hear it, there was a wild blast . . .

ON THE EAST COAST

What questions do Coast Guard investigators ask when a large, famous ocean racing yacht hits a rock? Answers below from a friend from Pensacola. Better go take that boating safety course . . .

Donnybrook on the Rocks

Our Annapolis to Newport Race on James Muldoon’s Donnybrook started Friday afternoon and ended abruptly early Saturday morning when the keel of the big black boat met the rocks of the south jetty of the Chesapeake Bay tunnel near Norfolk, Virginia. 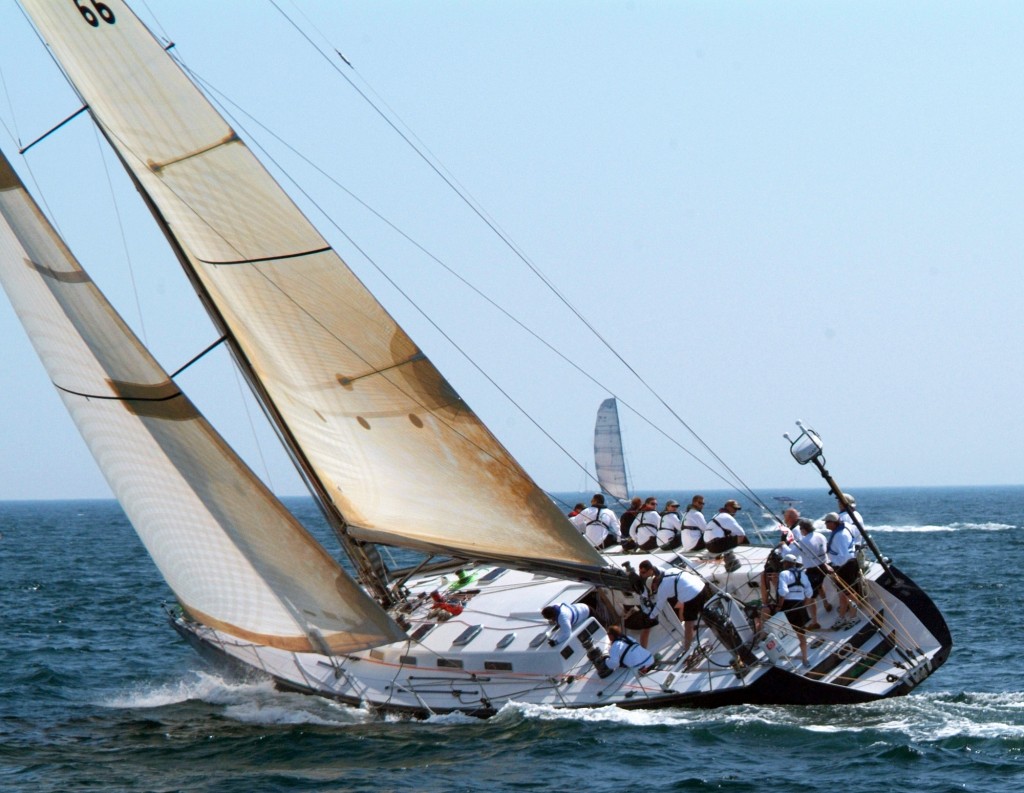 We were reaching up toward the channel at 6:45AM and bore off to cross over the tunnel. With all hands on deck, getting ready to launch a spinnaker for the next leg of our course around the ‘middle ground.’ The chart indicated 18 feet of water on the line we took, but the 12 foot deep keel proved the chart wrong.

We were doing 12-14kts when Donnybrook hit a solid wall of rock and the 73 foot 30 ton racer stopped in an instant. She spun to the right and bounced along in a jarring series of lesser hits. The crew were scattered in the cockpit and deck like fallen pins in the ally. Three of our mates were taken to the hospital as soon as the Coast Guard could get out to help us. One will have have surgery on a compound fracture of his forearm, the other two were treated and released.

I was trimming the mainsail, sitting on the deck in the cockpit and was thrown down on my right side. On the morning after “Donnybrook on the Rocks” I’ve got a hangover-headache from the bump on my head and a pretty sore right shoulder.

Owner Jim Muldoon was driving. He practically went through the port side steering wheel. He caught the wheel on his throat. Captain of the Black Watch, Peter Manickas, was bruised after hitting the other wheel, bending some spokes and braking the weld at the hub. Will Keyworth, the Green Watch Captain, flew forward from mid-cockpit and hit his nose on the bulkhead above the starboard instrument displays. He looked like Rocky after the fifth round. All hands on deck were down and surely all eighteen of us have some pain somewhere today.

Abby Sayer was below fixing breakfast sandwiches. She hit the counter by the sink. Her glasses and the sandwich she was making wound up in a forward berth. She narrowly missed being bashed by the companionway steps which flew across the cabin after being driven off the bulkhead by the weight of three life rafts stacked behind them.

After the initial shock, the crew rallied and hauled down the jib. I trimmed the main all the way in to drive the boat back up into the wind to try to head back on a close reciprocal course. We checked for lines overboard and Peter started the engine, put it in gear. Mr. Muldoon drove back out, bouncing Donnybrook painfully through the rocks as the crew got the mainsail down to take pressure off the damaged keel and furled on the boom.

Crew who weren’t hurt helped others who were, some crew checked for leaks at the keel bilge, others hauled the life rafts, ditch bags and medical supplies into the cockpit. Luckily, we were not taking on any water, but unluckily there were at least seven cracks around the keel bolts and their backing plate and at least one cracked stringer crossing over the front third of the keel. The boat’s emergency plan, which we had discussed in our crew meeting before the race started, was put into action and worked smoothly.

Navigator Kurt Lowman called the US Coast Guard who responded promptly in their 45 footer from Little Creek. They offloaded our three injured and left us with two of their crew and a pump for ‘just in case’ as we motored to the Little Creek Marina which was now saving the t-dock space for us.

We were greeted at the marina by the Virginia Marine Police and were now the focus of a state required marine accident investigation. With 18 crew, it was the largest investigation these officers had ever dealt with. They had to interview each of us asking for a photo ID and written statement on the crash and asking questions like whether we were wearing a PFD, what type, where were we on the vessel and what we were doing, how much experience we had sailing on Donnybrook, if we had completed any boating and safety courses.

Donnybrook motored back to Baltimore later on Saturday and will be hauled there for inspection and repair. It will be interesting to see how high up on the keel the damage goes. That will tell us how high the rocks were and how wrong the 18 foot depth on the chart really was.