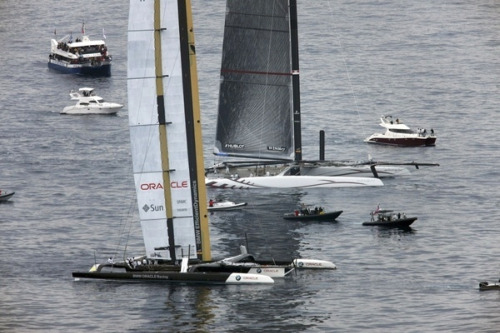 You’ve probably heard that we have here at the America’s Cup the two fastest, most technologically advanced large yachts ever built. And you’ve probably heard that it takes but a breath of wind to drive them at speeds most people never experience under sail. Sadly, there was no such breath of wind on the Med today, or none sufficient for building a racecourse. We are left remembering why television and sailing make uncomfortable partners.

During my daytime here in Valencia I was hearing from friends stateside who were sitting up late to watch the internet feed from the racecourse, or crawling out of bed to check in. Truth to tell, I wasn’t better off. I rolled out at 0445 to watch Larry Ellison’s team rally off the dock and hustle off to sea—way off to sea—to meet a 1000 warning signal. Which turned out to be an AP. Four hours later, PRO Harold Bennett blew it off and sent everyone home. 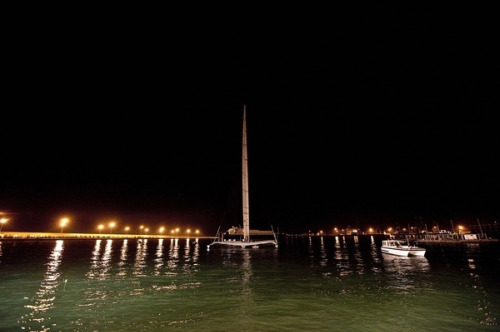 Per the Sailing Instructions, the next race date is Wednesday, warning signal at 1000. Another early dock-out.

I should have been watching the Super Bowl with my friends at Southern Yacht Club. I bet their roof is six inches higher today.

The Challenger will be eyeing a prediction for a stiff breeze to blow in tomorrow, on the layday, adding to their management needs with the wing. In theory it could force Ellison’s BMW Oracle team to drop their wing to protect it. Which of course adds the work and worry of re-installing it for racing on Wednesday. The book on how to do this is being written right now. The team is clear that dropping and raising a 223-foot structure is nothing less than scary, especially when it’s part-way up or down and a puff comes through and the wing wants to do what wings do, fly.

The Defender wouldn’t mind seeing them go to the trouble, of course. Ernesto Bertarelli’s Alinghi team has its own chores. Their sails are huge. But that part of the job doesn’t have to be invented.

So now we have another two days for the guessing game. Will USA skipper James Spithill use the winged trimaran’s vaunted maneuverability to go after Alinghi in the prestart? Is the common wisdom right that Alinghi will be faster in the light stuff, and if so, define “light” because that means there is a transition somewhere. Will the wind blow on Wednesday? I note that we were advised today’s conditions would be “sail-able.”

At least it leaves time for speculation on the next Challenger of record. Again there’s a widely accepted theory, and it’s probably correct, that the former +39 base was re-logoed GreenComm this week for a reason. 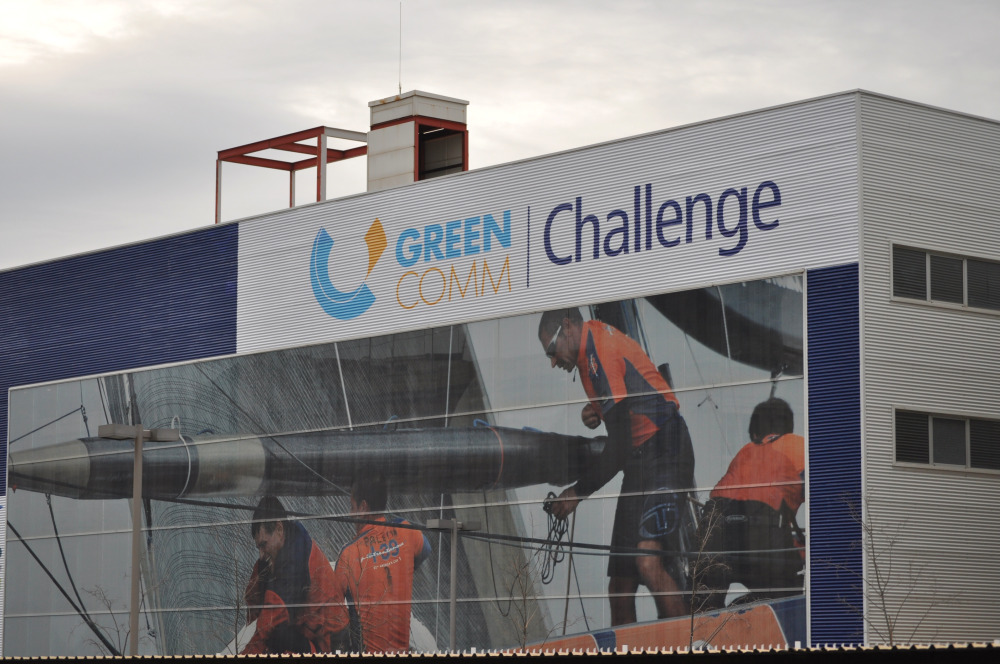 In the realm of déjà vu all over again, GreenComm first popped up in May, 2009 when Alinghi was trying to persuade the world that Ellison should have another boat to sail against, to earn the right to race. That notion was a nonstarter, but the challenge concept was/is associated with Circolo Vela Gargnano, on the shores of Lago di Garda. I’m pretty sure they would have been taking money from the Defender, and that I suppose does not preclude the possibility of producing a viable challenge—Bertarelli had money in Team New Zealand, which gave him a good run in 2007—but it really isn’t the right way to run a railroad. Actually, it probably is a good way to run a railroad.

And only four days ago, Ellison’s buddy Vincenzo Onorato announced new legs for his team, which is now Mascalzone Latino Audi, with plans to compete in the Louis Vuitton Trophy and the Farr 40 and Melges 32 classes. Anyone sailing in the Vuitton has to be considered as having continued America’s Cup ambitions, and Onorato filed a friend of the court brief at one point, supporting Ellison’s position against Bertarelli. In the absence of a buzz from other quarters, you have to picture him as a likely Challenger of Record preference, should Ellison win. Which is no guarantee that he wants the job.

Meanwhile, seeing Bruno Troublé comfortably at home in the back offices of the BMW Oracle base is enough to make it clear that the Vuitton Cup could easily morph into a series of pre-events for AC 34, should Ellison win here. You will recall that Troublé, once a Cup-challenging skipper himself, developed the idea of the Vuitton Cup as a venue for the challenger eliminations and made it work for years, until he decided in 2007 that Bertarelli was going the wrong way with the Cup, and he packed up Vuitton’s marbles and hit the road.

You Always Take the Weather

BOR’s weather guru, Chris Bedford, offered a briefing after Monday’s abandoned race and drew a laugh by quipping, “The Race Committee did a nice job of settling us between two winds.”

But, asked if he thought there had been a sailable course out there somewhere he answered, “Probably not. The Race Committee did a good job today.” 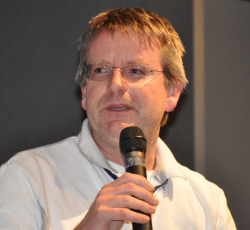 Bedford’s weather team had six boats on the water. His station is near the top mark of what was today a 20-mile leg. Off Valencia, the prevailing winter wind comes over the land, so it gets chopped up and in this case channeled into different streams with a pothole zone between. Close to shore, meaning also at the weather mark, there were readings at times of 14 knots. In the start area, a southerly occasionally dribbled in, but even if had filled it would not have been what PRO Harold Bennett was looking for.

So is it going to be possible to lay a 20-mile weather leg free of 30-degree permanent shifts, per 8.6 in the sailing instructions? “Yes,” Bedford says, “it’s just going to take time.” 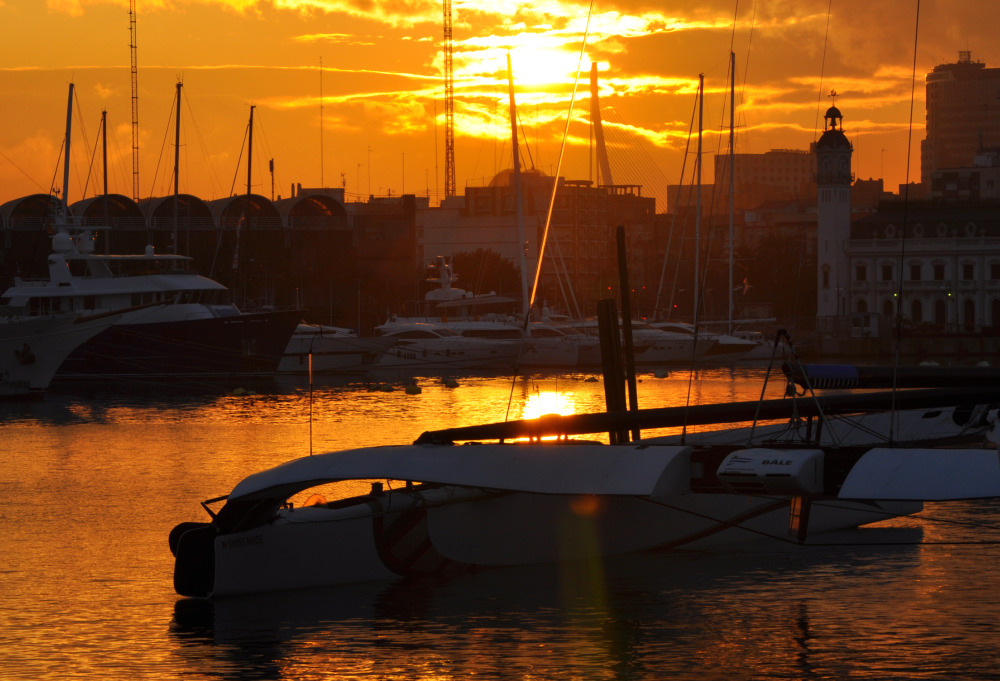 Next up: A low pressure system is expected to blow through overnight, with strong wind from the northwest, easing overnight on Tuesday to a possibly sailable day on Wednesday, but with a leftover sea. To this point, Bedford said, his “wing forecast” is that it will be manageable to keep the wing up.” Even though he is on his eighth Cup, this one is different on two counts. He has to put out those wing forecasts 24X7 unless the wing is down, “and the race information is much more of a routing forecast, because this is more of an ocean course. The information I put out includes angles to sail, because you might sail at a less than optimum angle to get to something favorable. I’m comfortable with that because I’ve also worked the Volvo.”

The team’s Director of External Affairs, Tom Ehman, managed the briefing and took a question regarding the operation of the Race Committee. Ehman rides aboard the RC boat in the role of Challenger’s observer. In his opinion, he said, PRO Bennett is entirely in charge, and based upon his decisions today, entirely independent. That perhaps will settle some of the handwringing in certain quarters, but it won’t heal the atmosphere.

I also covered the Deed of Gift match in 1988 between Dennis Conner’s winged cat and the Kiwi Big Boat. Meaning I have covered 100 percent of the DoG matches sailed in the history of the Cup, and I recall Conner saying to the press, “If you’ve been for a ride on one of the boats, you probably haven’t been out on the other.”