Part 4.1 of a series of conversations with people who are driving profound changes in the way that we are able to sail. Once the opportunities are clear, how will people choose to sail?

Mike Drummond took his 2009-2010 holiday break down in Kiwi Land, but as a faithful employee of BMW Oracle Racing, he was willing to interrupt his “vacation” to talk futuresailing. The design director for BMOR’s 90X90-foot trimaran was even willing to jump right in. Without hesitation he revealed, “In the future we’ll all be sailing faster due to the lower viscosities produced by global warming . . .”

He’s set a fast pace. After the wing development program closed down in San Diego, Drummond winged home to New Zealand, then hopped across the Tasman Sea to race the Australian A-cat Nationals (11th to Steve Brewin), and then he was off to Valencia to meet the trimaran and the wing.

I turned to Drummond, not because the man has a futurist agenda but because he has his hands on an incredible toy. I wanted his thoughts on whether or not wings might be coming into their own after decades as novelty items, but I have to take the man at his word when he says, “Doing this job is like standing in the middle of a motorway. I haven’t exactly had time to think beyond the match, but—

“Yes, we turned this around in a hurry. Perhaps we’ve taken a step toward demonstrating that the logistics of a wing are not as daunting as you might think. Some of it is non-intuitive, but the wing is free of the restrictions of backwinding from the jib. The physics of it are quite simple.”

Apparently the wing project—after a lively discussion—was launched only 11 months ago.

Drummond also made the point that development is driven by materials. Subtract carbon from the equation and today’s hotrod boats become something quite different. Future steps, he said, “might be driven by a material that hasn’t been invented yet that’s lighter and stronger than carbon; actually, it’s been invented, it’s just not available commercially.” 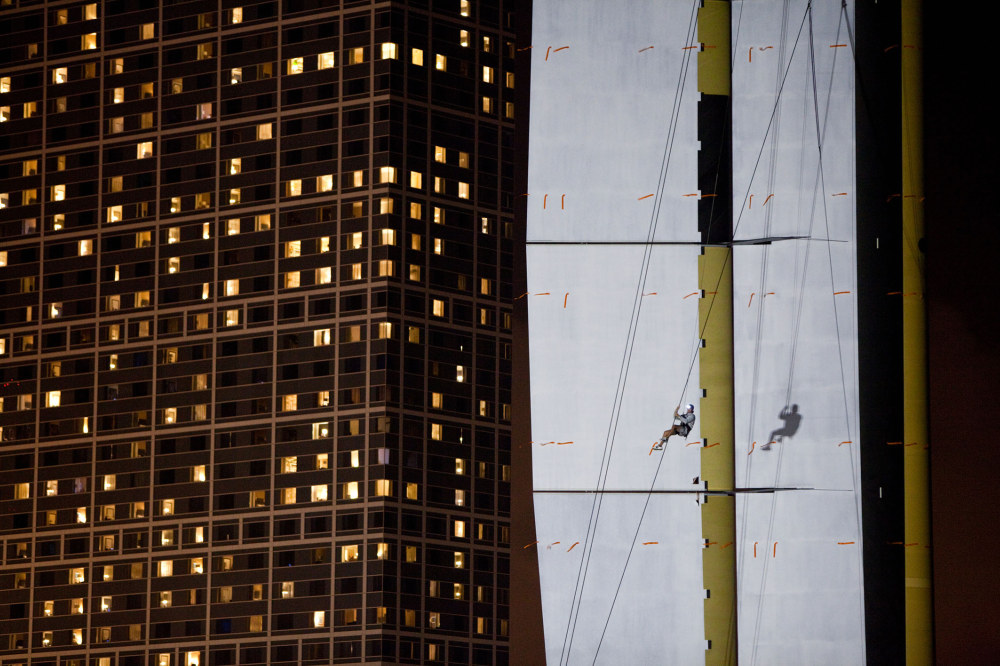 Click to enlarge; you won’t be sorry. Photo by Gilles Martin-Raget/BMOR

At this point I’d better say that the wing is (I believe) somewhat smaller and also heavier than the mast and mainsail it replaced, but much better at carving wind into motive power. It can be paired with a jib if required. (Probably in light air?)

And to a direct question, Drummond allowed as how, yes, “on paper” the wing is capable of producing negative lift.

Now here is a concept.

Negative Lift is what you generate from a vertically-sectioned wing, using a lower portion to drive the boat forward (also creating a heeling force) while a contra-shaped upper portion counters the heeling force, lifting the boat back toward its upside (in every sense of the word).

Negative becomes a positive. Compared to all other methods of compensating for the heeling force, resisting it, or accommodating it, negative lift is mojo magic. This is one facet of potential wing superiority that a soft sail can never match.

And Drummond answered plausibly, “We can achieve negative lift, on paper, because with a wing you can achieve shapes you can’t achieve with a soft sail. But it remains to be seen if that’s an effective way to sail this boat. I’m not sure we’ll even get to test it.”

Hearing that, and being a bit of a veteran of America’s Cup reporting, I have no way to choose between Door Number One (this info was planted, successfully, as misinformation) or Door Number Two (they’re generating Negative Lift like crazy, and Mike’s low-key response avoids both lying and over-revealing) or Door Number Three (the nice man is simply telling me what he knows).

The America’s Cup makes whackos of all of us. What is certain is that negative lift, and how to generate it, is very much a part of the conversation among the wing nuts of the world, who are also some of the smartest engineers in sailing. Wingnuts, not. 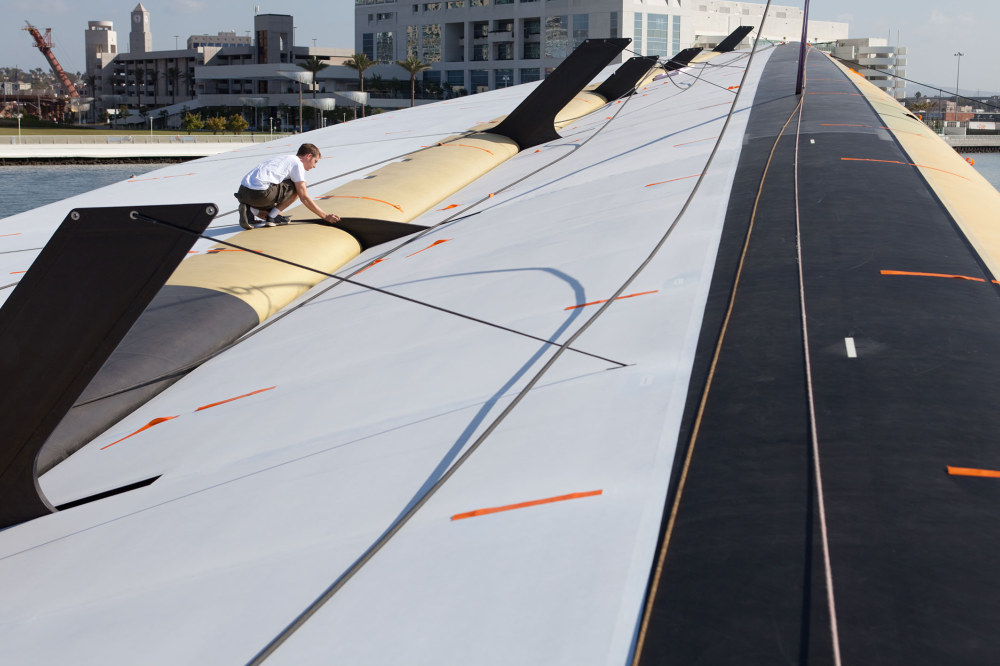 The wing, lowered, before it left San Diego. Click to enlarge.
Photo by Gilles Martin-Raget/BMOR

So is this a cool concept or what? To use a portion of the wing to counteract the sideways force of the driving portion?

Think of all the speed-record craft that have been designed as one-way boats for the sake of a configuration that minimizes or resists the heeling/capsize force. Here is a way to shake hands with Mother Nature.

Of course it’s not that simple.

On the BMOR tri, the wing has a main body divided vertically into eight sections, individually trimmed for optimum camber, but a leading structural section that is a single unit from bottom to top.

In 4.2, more about negative lift and a note about lighter-and-stronger-than-carbon materials. But for now a little wing-porn, soft core, with Point Loma for a modesty skirt. Also in 4.2 and, visually, below, “the frightening scale of the project.” 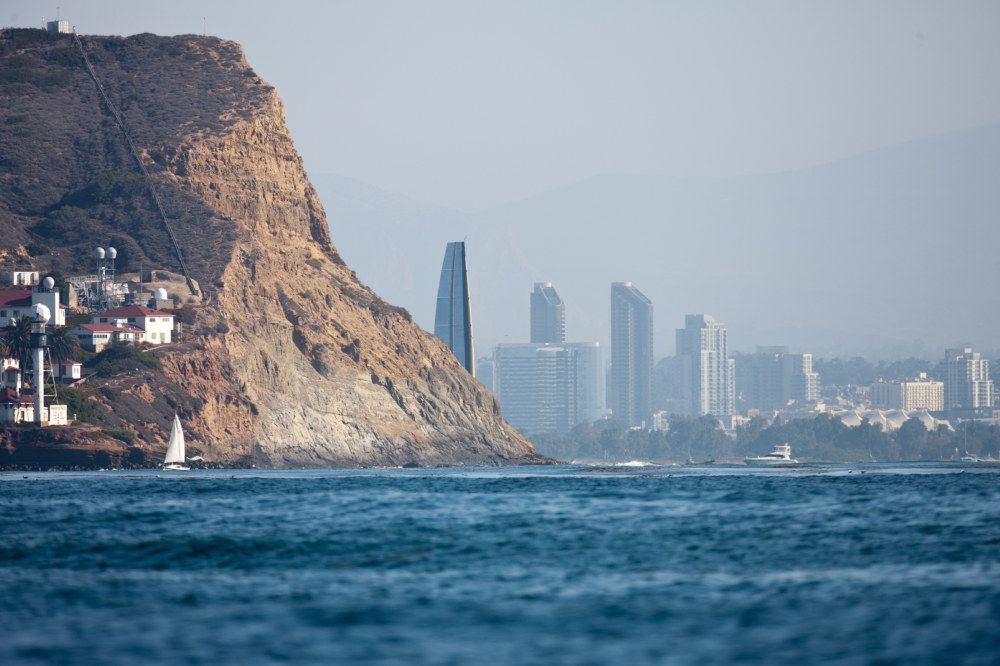