Hurts So Good, This Ocean

So I made a wisecrack about how Qingdao-to-San Francisco, crossing the North Pacific in winter storms, would not be the leg for little old me, and Zoe Williamson shot right back, “Having done the full-circle navigation, that’s the one leg I wouldn’t let anyone take away. There were times when I wondered what I was doing, but the sense of achievement at the end was amazing.”

Apparently, in this sailing thing, the more it hurts, the better it gets. Eventually.

Zoe went around four years ago, finishing her Pacific leg in Vancouver, B.C. With her for our conversation was Carol Reed, a 45-year-old media relations director taking a long sabbatical this year to be a rounder, as they call it, rather than a legger. Carol was only slightly removed from arriving through the Golden Gate on the Canadian entry, Cape Breton Island, 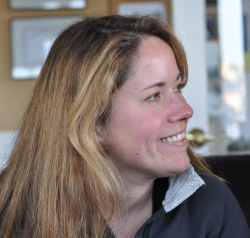 , the first boat to finish her own Pacific leg. We were kicked back in sofas on the lower level of the Golden Gate Yacht Club, San Francisco, just a few feet from where other Cape Breton Island crew were mending sails that were obviously straight from the front lines. This is Zoe on the left. And Zoe asked, “Carol, if someone said to you now, I can let you do that round-the-world sail, but we’ll just take out the leg with all the storms in the North Pacific, how would you feel?”

“Oh no, you can’t take that,” was Carol’s answer. “That’s the leg that made a real change in me.” 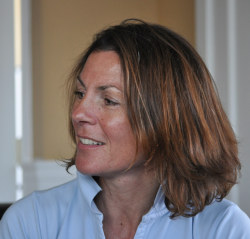 The woman was two days past arriving in San Francisco after 5,600 miles, 28 days, from Qingdao, China. And storms? Lordy-Lordy. The Clipper’s 68-foot sloops are built for stout, but more than one took knockdowns. Everyone had to live with crashing seas and frigid, driving rain, and then more of it, and then more again. It’s been a hard winter in the North Pacific. As for dealing with that, Carol said: “It’s about being confident that you can do something, but also having a sense of fear of that freak moment when you are not in control. We have Nova Scotia sailors on the boat, some very experienced people who know bad weather, and they had never seen what we just saw.” 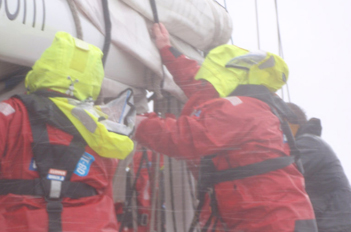 Carol again: “The fatigue was there, but you just had to keep going. We knew that we had to put our best helms on, and we knew our watch system had to change. We stripped all the cushions out; we had everything battened down; we had people just sitting below waiting for their turn on deck because we had to rotate on a frequent basis. Yes, there is a sense of achievement, but the important thing was watching the crew dig deep, and pull together.”

A crew that includes a farmer, a banker, a student, a physiotherapist, a physician . . .

“I’ve always wanted to learn how to sail,” Carol said. “What better way than to do a round-the-world yacht race, with the Clipper training that they give you, the survival at sea training, navigation and meteorology, all the first aid. Now I have my offshore miles.” 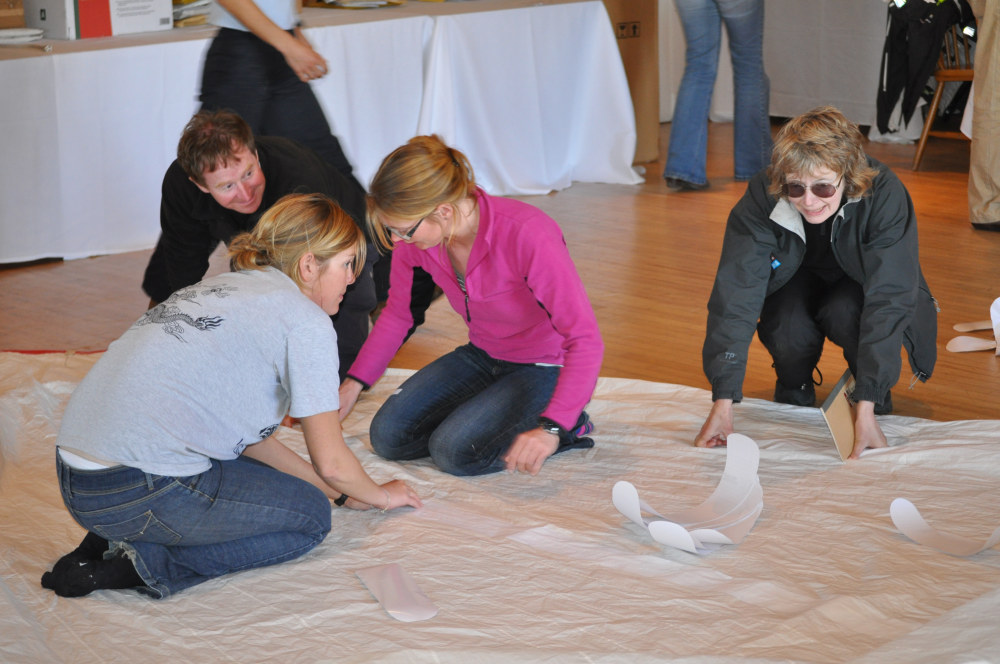 As Easter Sunday dawned four of the nine remaining Clipper boats had arrived at the San Francisco Marina (one of the original ten was left on a reef between Singapore and Qingdao; it’s replacement will meet the fleet on the eastern side of the Panama Canal). In port, the pay-to-play crews and the professional skippers, one per boat, were energetically going through the innards, making fixes, cleaning up, and airing things out as well as they could in changeable and sometimes wet weather. There was an afternoon downpour that washed ducks out of ponds, then a break as darkness fell and four more boats had their moment to sail under the Golden Gate Bridge, into San Francisco Bay.

Spirit of Australia, Hull & Humber and Edinburgh Inspiring Capital were bunched because they were the last of the relay team escorting California, which broke its mast in a knockdown on March 21. The crew decided it was harder to turn back than to go forward. Other boats have escorted, transferring fuel to California in difficult conditions, and I suggest you read my words, “transferring fuel to California in difficult conditions,” with your imagination switched on. This has been hard. And picture spending the last two weeks motoring a sailboat through rough seas. The motion must have been horrific, not to mention handling diesel.

Out of deference to travail, California was allowed first-entry to the harbor, whose entrance has re-silted and narrowed since being dredged for the 2009 Rolex Big Boat Series. The air was biting, cold and misty as California motored (ugh) in . . . 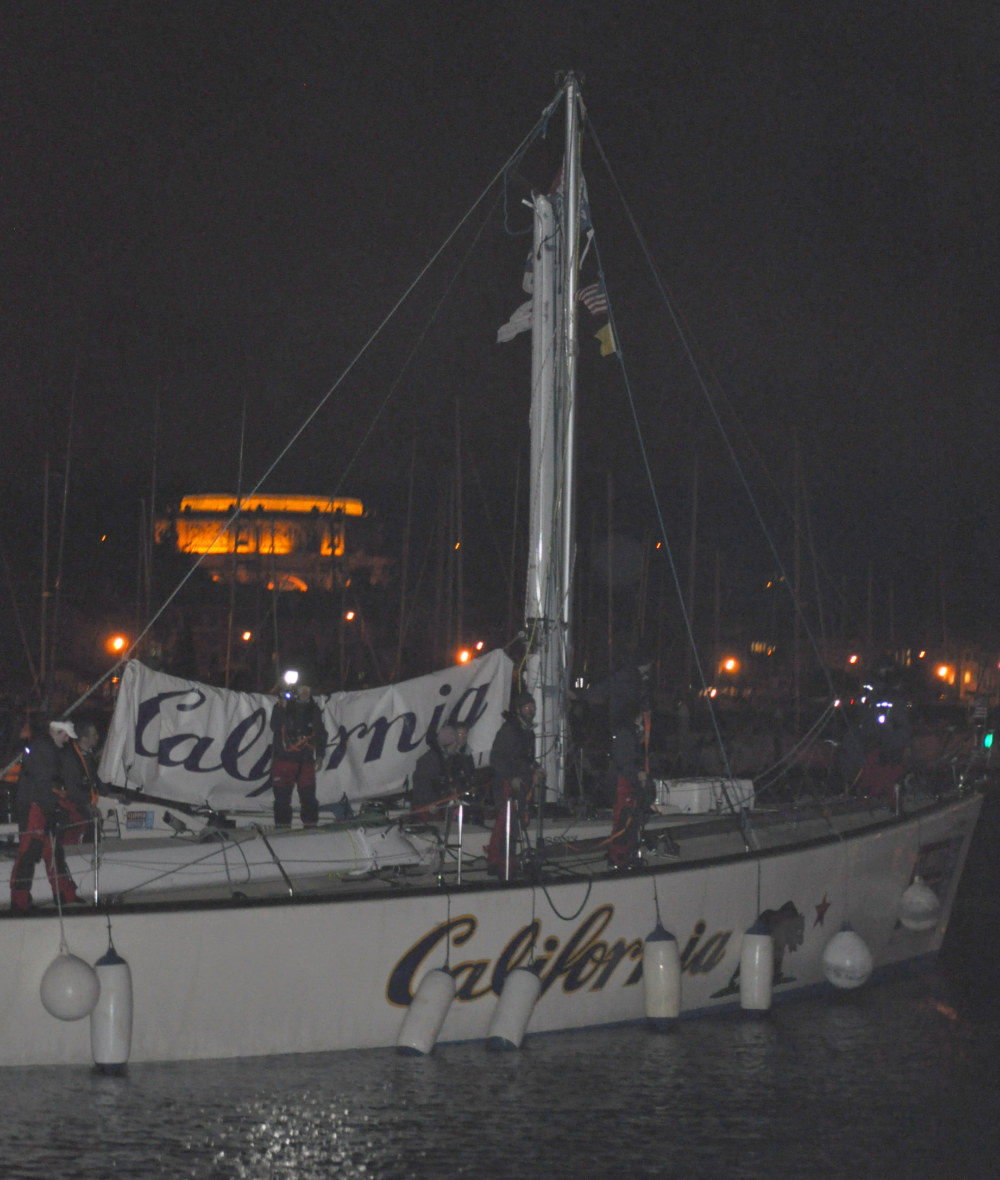 California with an “art piece” for vertical. Photo by Kimball Livingston

A new mast awaits installation and tuning. Meanwhile, Team Finland is still 2,500 miles out after losing its rig on the Singapore-Qingdao leg and departing China two weeks behind the fleet. The scheduled April 11 start from San Francisco for Jamaica has been set back to, probably, April 16, to give Team Finland five minutes in port before it’s time to go back to sea.

Every boat had a crowd to greet it, braving the elements, but California was the special story . . . 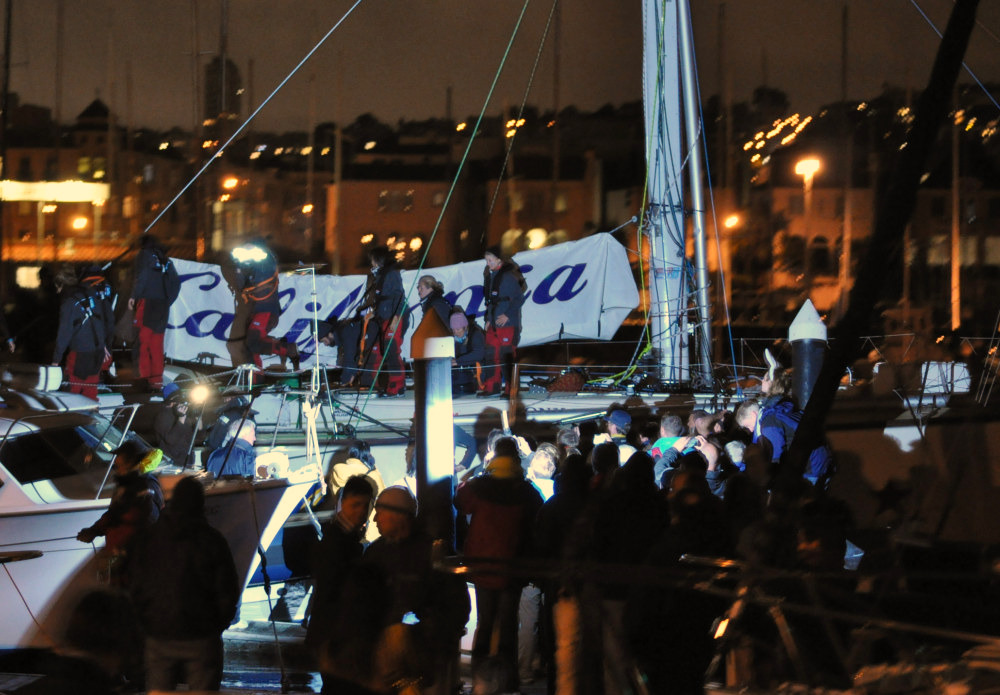 Thank you, immigration, for meeting them at the dock. Photo by Kimball Livingston

The next leg, southbound down the west coast of the Americas in springtime, then transiting the Panama Canal, should present fewer extremes. Or, as Carol Reed expressed it in speaking of “the look on someone’s face” as they were about to climb up the ladder to the deck in the Pacific storms, there should be less of that “air of unpredictability. We would clip on before we left the ladder. If we hadn’t had everyone clipped on with harnesses we would have lost people. All the boats would have lost people.”

The Clipper Round the World includes a Southern Ocean leg after turning the corner at Cape Town, but it was nothing to compare to this.

Zoe Williamson worked for the BBC before sailing her Clipper circumnavigation, then later went to work for Clipper Ventures and today is on the case for PR. Through her I will share this quote from Jim Dobie, skipper of Uniquely Singapore, which arrived on Saturday: “This race delivered the worst sailing conditions I have ever been through in my life and it was relentless. It wasn’t just a low coming through; it was low after low, storm after storm. It was pretty frightening to be knocked down, but we got over it. The boat was pretty damaged, but we knew we had to get it sorted and carry on.”

Two views of the 41st edition of the ISAF Trofeo Princesa Sofia Mapfre for Olympic classes, completed in Palma de Mallorca. The top dog among the winners was Italian windsurfer Alessandra Sensini, dominating the women’s division of the RS:X. 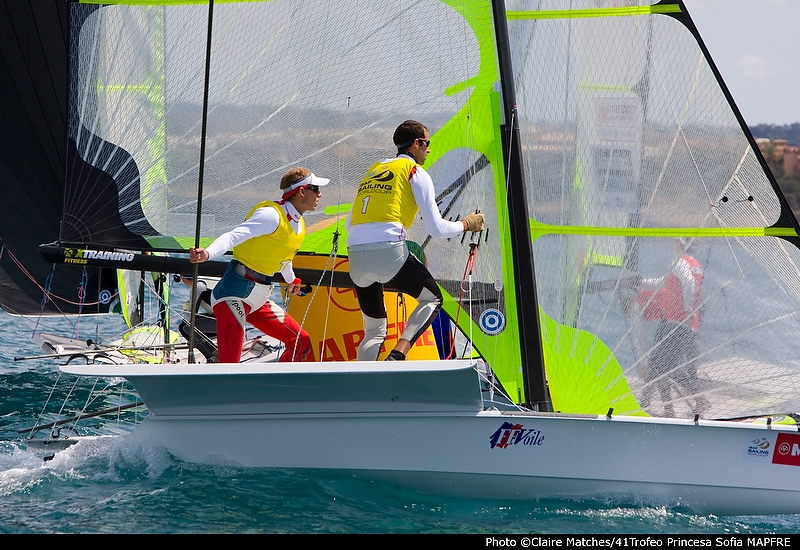 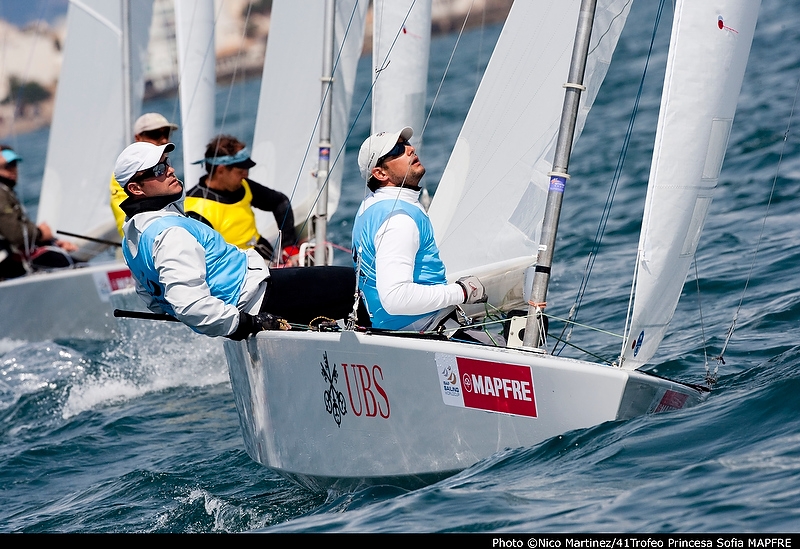 AND A TIP OF THE HAT

To Bill Quigley, for building a fast Farrier-designed trimaran, Tatiana, and to the two men who brought it home first in the Doublehanded Farallones Race, sailed out of the Golden Gate over the weekend—the same waters where the Clipper Round the World race boats are completing their long journey from China. The start was slow, but the ocean was serious. There’s a channel leading out to the left, and that’s the San Francisco Bar—aka the Potato Patch Shoal—breaking in the background. If I had been patient, I could have caught bigger breakers. 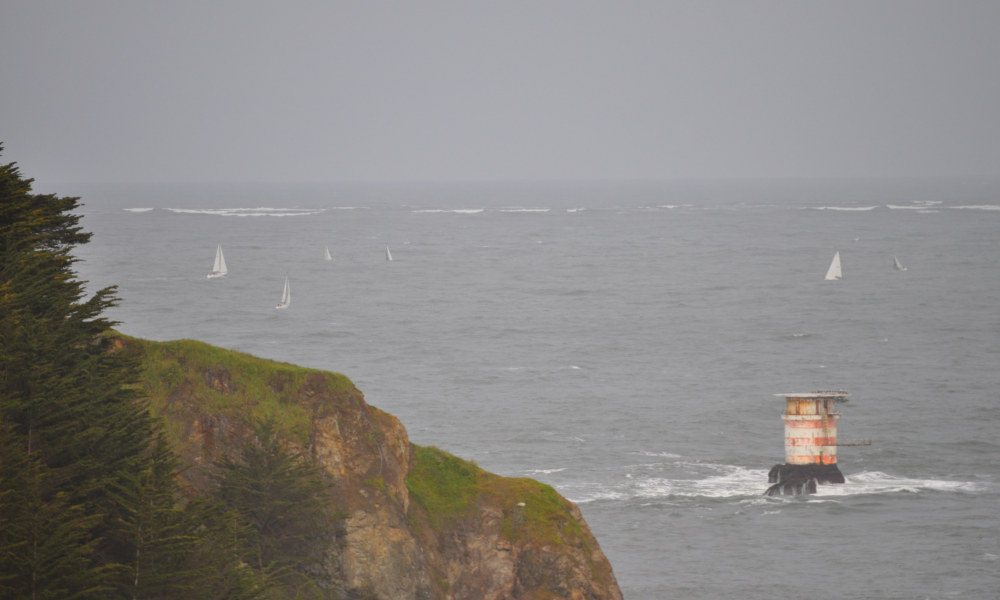 The channel and the bar, the race outbound; photo KL

The Doublehanded Farallones is 58 miles plus tacks. Tatiana made the outbound and return in about 6.5 hours.

Unfortunately, Bill could not make the DHF, so Pieter Versavel, who usually sails Musto Skiffs, crewed with me. The conditions somewhat favored multis (except for the sea state which was beyond ugly). We had a fat layline on the way out and an almost perfect screecher angle on the return. So yeah, a Swiss won, in more than 1m of waves and 10kn of wind; on a trimaran 😉
Urs Rothacher

Quigley’s boat is self-built, with some help, and I like how he quotes John Guzzwell (Trekka Round the World), “It is when you are riding out your first gale in a boat you have built yourself that you wonder about some of the doubtful workmanship that went into her.”

And I’ll quote Bill Quigley himself: “The worst reason for building a boat is to save money.”

At the skippers’ meeting the week before—the race is run by the Bay Area Multihull Association—Clifford Shaw was awarded US Sailing’s Arthur B. Hansom honors for his rescue of two sailors in the 2008 version of the race. Luc de Faymoreau and Disun Den Daas aboard the former’s Olson 40, Pterodactyl, were swept off the boat by what they described as a “freak wave.” Shaw, who was shadowing the race on his Crowther 36, Rainbow, saw the Olson begin to act erratically and went to investigate, pulling the two men aboard in 15-foot seas.

I reckon that may have been less automatic than I just made it sound.