In With the Old

Lots of people passing along the San Francisco cityfront have noticed a stately black schooner with tall, raked spars—a replica of the America that won the 100 Pounds Cup, now known as the America’s Cup, way back in 1851—tied up at the Golden Gate Yacht Club. Troy Sears, who usually keeps the boat in San Diego, has followed the America’s Cup trail to the next logical venue, San Francisco Bay. Here’s the promotional quote: “The replica was built in 1995 at a cost of more than $6 million. It now serves as a sailing vessel for entertainment and hospitality events, private charters and individual sails for up to 80 people, and will be operational in San Francisco through September 2011.” 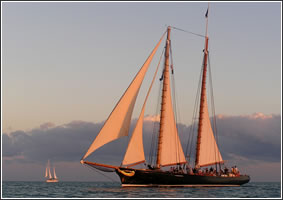 Unpaid ad for the bro: Call 855-227-3201 for reservations and ticketing on the America, or to sail on something much more modern, but no longer fashion-forward, because . . .

The America is not here alone. Sears has also brought up an IACC monohull, built in 2002 for the Oracle Racing Team to sail at the Cup in Auckland, New Zealand. That would be USA 76, a boat whose tides of fortune did not match those of USA 17, the giant tri that won the Cup in February, 2010. USA 17 is now warehoused at Pier 80, south of AT&T Park (go Giants) and Pier 80 is where America’s Cup management tells us they will stage the AC72 catamarans when the big boys debut at a World Series event in the second half of 2012. It also is, presumably, the base for the pair of AC45s that Oracle Racing is bringing here for a training session beginning some time in June.

Troy Sears was my Protector driver for race one in Valencia . . . 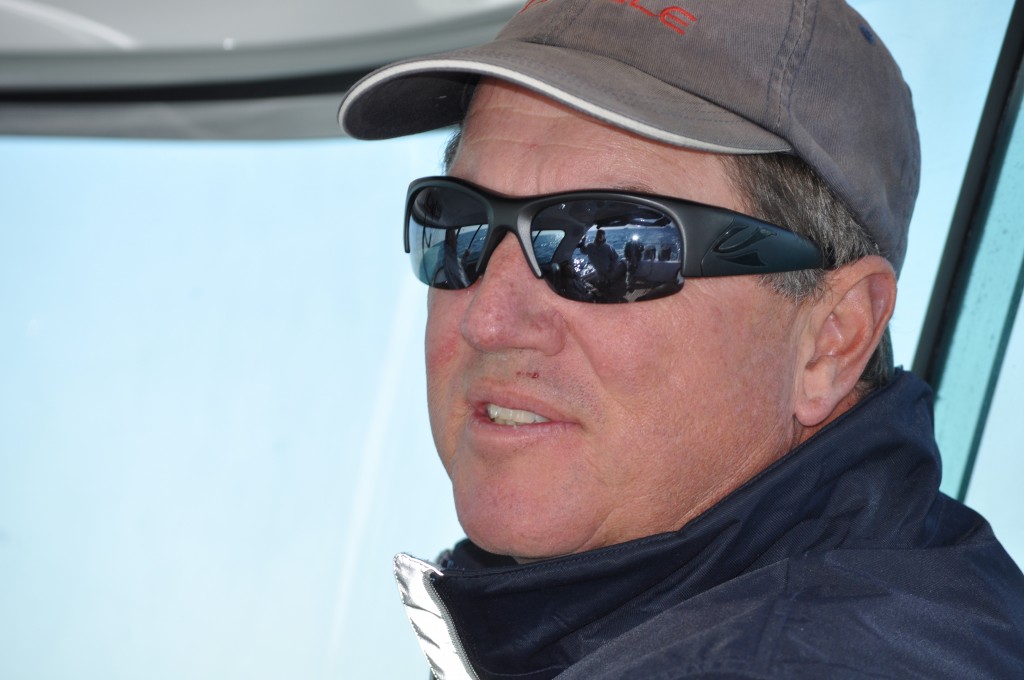 Chasing the big tri. I was hangin’ on with one hand and hoping something would show up in the frame . . .

We put in way over a hundred miles that day. In a RIB. And people still ask, will the big tri ever sail on San Francisco Bay? And my best answer remains, dunno. The way that Oracle Racing team members such as John Kostecki have explained the situation, it’s all about resource. The same people and talents and considerable energy that would be required to launch and sail USA 17—which they would love to do—are in screaming demand as we build toward an inaugural World Series regatta in Portugal in August, and an America’s Cup on San Francisco Bay in 2013.

But here’s a thought for your smoking pipe. In the May issue of Seahorse magazine I find Paul Cayard speculating that the big tri might “soon” be relaunched with an AC72 wing.

Which would fit under our bridges and . . .

Which forced me to (sigh) do a spot of research in the form of re-opening the Protocol, where my untutored eye finds no restriction on such a thing. An AC72 wing would be roughly 90 feet shorter than the famous wing-that-won’t-fit-under-the-Golden-Gate-Bridge, but it might provide ample power on a typical seabreeze day on San Francisco Bay and, more than that, serve as an “interesting” development platform for a first-generation AC72 wing.

In the Protocol, there are restrictions:

29.6 Mast Limits
Each Competitor may build, acquire or otherwise obtain a maximum of eight AC72 Yacht Mast sections, provided:
(a) a Mast section is included in this limit upon becoming a part of a Mast (or wing) stepped into any yacht; and
(b) a Mast section shall be deemed to be new if more than 30% of its mass is replaced.

And above that in the Protocol—

29.3 The acquiring or obtaining of a yacht capable of being measured as an AC72 Yacht without significant modification shall be deemed to be the acquisition of an AC72 Yacht;

If there’s a restriction there, I haven’t found it.

Would it make engineering sense to test an AC72-spec wing on a boat much larger than an AC72? Hey, as engineering goes, I’m a big fan of Yeats. EE Cummings. Pound. Ai. (Heh, betcha never heard of her.) So don’t be asking me, but if this is swamp gas, maybe my friend T.J. at Oracle Racing will stop me before I kill again.

She went 8th and 1st in Monday’s opening races of the Melges 24 Worlds in Corpus Christi (surely you know that’s Texas), so congratulations to Kristen Lane. But what you ought to know is that, sailing “invitational” races from the dock of their home in Tiburon, California, Kristen and husband Peter Lane built up a coterie of people and a nexus of enthusiasm for team racing that has helped tremendously to bring that growing phenomenon to Northern California.

They don’t get all the credit, by any means, but they moved the ball. The result: This weekend there will be a first-ever St. Francis Yacht Club Team Race Invitational, with Newport Harbor Yacht Club, Southern Yacht Club, and New York Yacht Club in the hunt.

And if my friends at the Monterey office of the National Weather Service have it right, we’ll finally be drying out. From the skies, anyway.