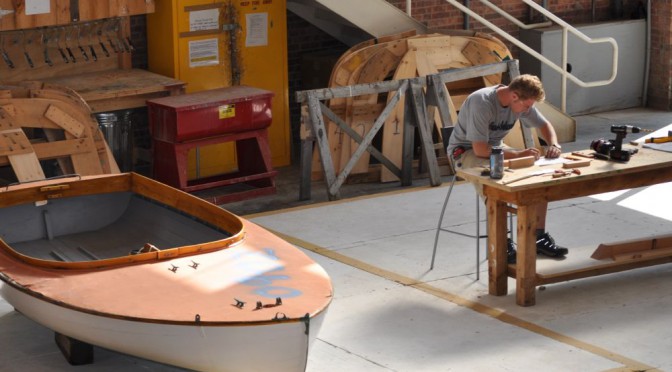 Story and Photos by Kimball Livingston

Walking through door of the International Yacht Restoration School will likely affect you considerably.

But I’ll let Jens Lange tell it his way. Jens is a grownup who had a successful but less-than fulfilling 18-year, Europe-based career in the auto industry that had him jetting around the world earning pretty good money. He was also a sailor who sailed Nordic Folkboats and had a thing for wood and—

“I read an article about this place. I read it more than once. It sat on my desk for months. Finally I had business close by, and that was an easy opportunity. I walked in, I smelled the boatyard smells, I loved the atmosphere, I was hooked.” 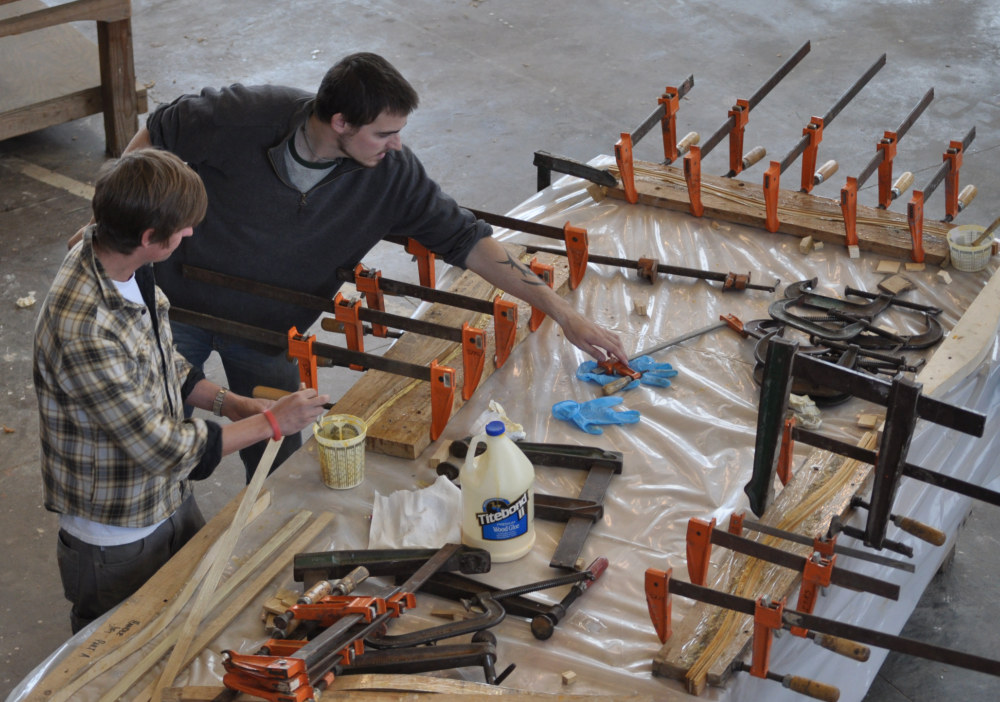 Clamp it. Photo by KL

Jens left his job and went back to school, graduating on June 5, 2010 from the two-year Boatbuilding and Restoration Program at the International Yacht Restoration School, which going forward we’ll call IYRS, and which you might as well know the in-crowd pronounces as in the flower “iris.” Picture a huge facility on the waterfront of Newport, Rhode Island, with light filtering in from high overhead, encouraging a sense of spirituality amongst an assortment of tools and parts and materiel that will eventually become boats—or become boats again—and altogether this might be taken for clutter, but it is not that. IYRS is not the only school in the USA that is teaching the woodbutchers’ craft, but it is a leader. If you’re into this sort of thing you will know a cathedral when you see one. 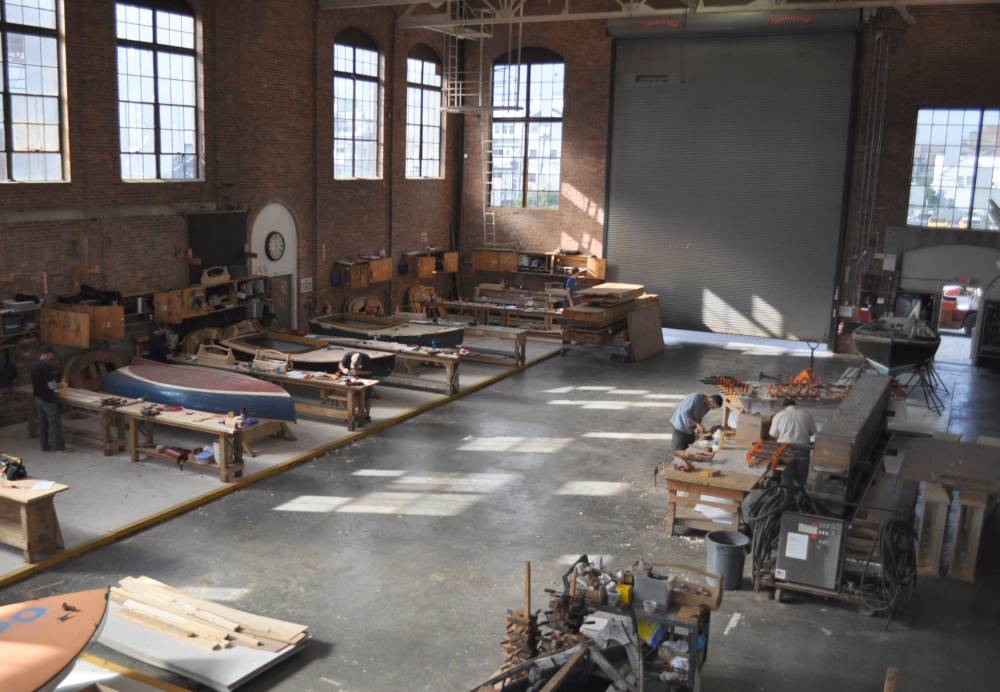 A quiet floor with most students in lecture. Photo by KL

Hand it to Jens. He says, “I left the auto industry two months before the whole thing went bonkers. There was a downturn, and this has been the perfect place to hide.”

Besides which, he’s doing what he wants to do.

Besides which, he’s doing it in a special atmosphere that has delighted thousands of visitors. If you’re in Newport, you should visit IYRS. It’s free, the experience is there waiting, and you won’t be sorry. 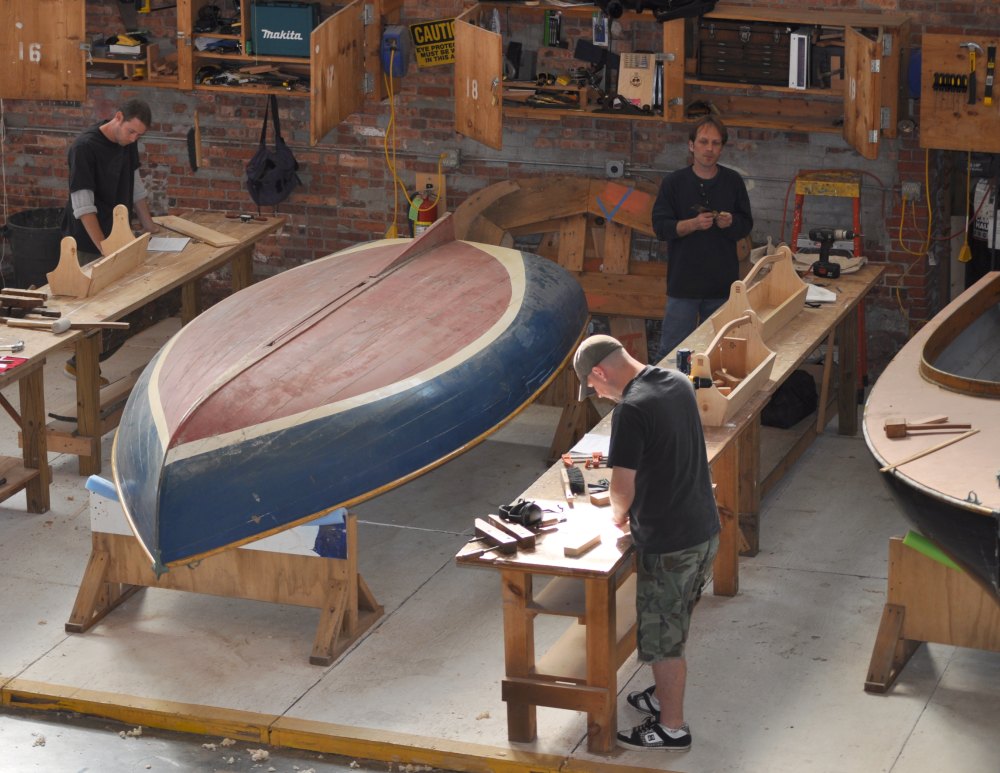 IYRS likes to describe its mission as “shaping the people who shape the industry.” That’s lofty, but without a doubt the school addresses the need for skilled marine professionals who understand both the business side and the craft. Along with building and restoration in Newport, the school has been teaching a one-year Marine Systems curriculum in a facility in Bristol, preparing students to sit for the ABYC certification exams, and this year it is launching a Composites Program that integrates the skill sets one step further. IYRS needs additional programs, probably, to become a self-sufficient teaching institution not dependent on philanthropy, and that’s the goal. Even if it succeeds there, IYRS will continue to solicit boats to be restored by the students, which then are sold to help keep the lights on. Some beautiful work has come out of this place where they espouse, “preservation through use.”

IYRS attracts a spectrum of students, as described by Jens’ fellow 2010 graduate, Bobby Cutler, who puts it this way: “One kid is a second-generation cabinet maker; another had been into building surfboards, and other kids have never picked up a tool in their lives. They’re all ages, all backgrounds, different nationalities. We get along because we share a love of working with our hands.” 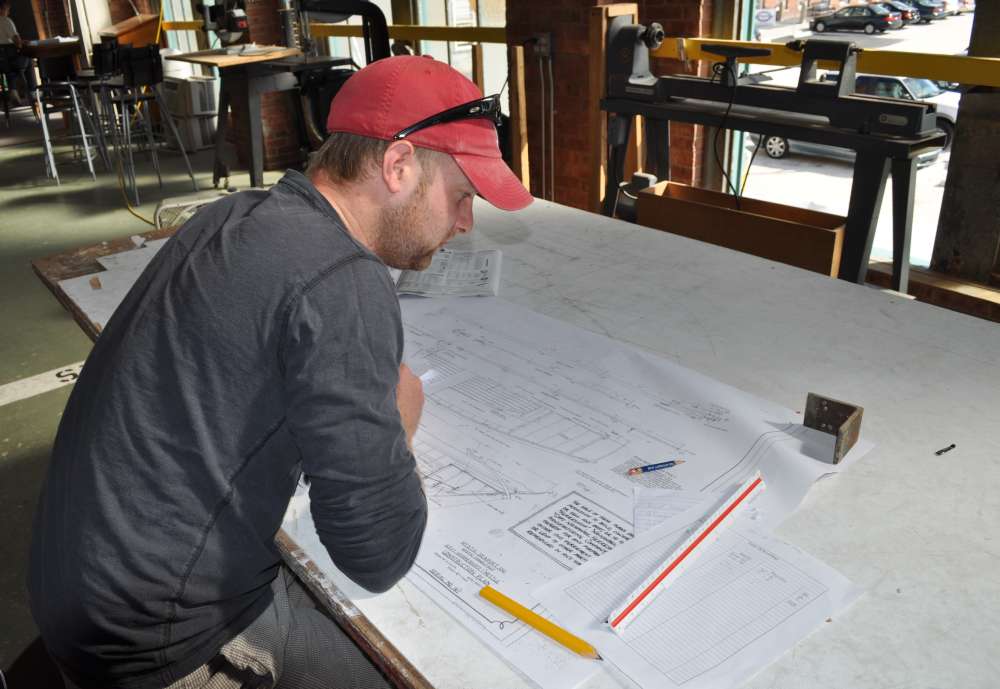 Bobby Cutler and his project. Photo by KL

Bobby is our focus for this segment of the story because he is, himself, a story, someone from a college-expectations family who tried a few “but it didn’t work out” and was searching for something. “I couldn’t sit still in a classroom,” he says, and points to a nearby room where lectures are given, “even that is a nightmare for me.”

Bobby hails from the idyllic rural community of Harvard, Massachusetts (not to be confused with the university): “My dad is a developer. He tells me now he wishes he could have gone to this school. If you can build a boat, you can build anything.”

The two-year Boatbuilding and Restoration Program in its first year addresses hull measurement, lofting, drafting, half-model making, and the restoration of a small plank-on-frame sailboat (where “restoration” includes documentation, backbone construction, steam bending, planking, spar building and finish work). The second year builds upon those skills with a more demanding project on a larger boat and, importantly, teaches the skills for success on the business side. By way of project management, the student estimates a job, Cutler says, and that involves “every single fastener, rivet, bronze rod, the dimensions of every piece of wood, the type of wood, the lofting, the pencils that you’re going to use, the paintbrushes you will use for painting, labor costs, shop hours including selecting stock and milling to dimension, contract agreements—it’s kind of a nightmare.”

An approximation of the real-world nightmare, obviously, that lays bare the differences when one student estimates a job at $40,000 and another at $70,000. 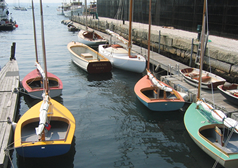 “Students start with a Beetle Cat,” Cutler says, “and that gives you a pretty good idea of how things are done. Then comes the Herreshoff 12.5, which has tighter joinery and a higher level of finish. There’s no room for filler, no room for mistakes. And we loft out the 12.5 even though, technically, we don’t have to.”

For his graduation project, Cutler worked on a lovely little Gar Wood that had pretty much left this world. “The boat came to us in pieces,” he says. “We kept the hardware, some engine parts, the benches.”

Then came the other 98 percent. The early project phase looked like this. 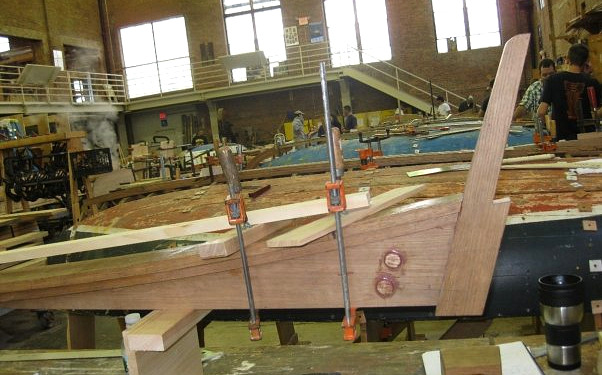 The beginnings of a 98% restored Gar Wood. Photo courtesy of Bob Cutler

Cutler had grown up with motorboats, so a 21-foot Gar Wood was a logical choice (for his nephews, he had already built a pair of “boat cribs” that should be around for generations). Next year he wants to come back for the new Composites Program. “I love working with wood,” he says, “but I’m also intrigued by high technology in boatbuilding. If I have both skills, I’ll be twice as valuable.” 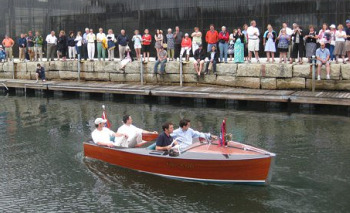 Speaking of graduation day, and Gar Woods—and some late nighters, coming down to the wire—how many schools are there, besides the International Yacht Restoration School, where graduation day means launching boats, and setting forth in those boats? Nothing metaphorical, a literal setting forth. They either float or they don’t.

We don’t have to explain it the way Obi Wan explains The Force to young master Luke, but just the same, everything is tied together. Including traditional boatbuilding and carbon fiber lamination. 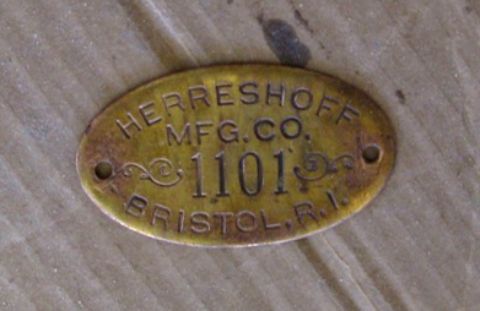 Clark Poston is the Program Director at the International Yacht Restoration School, which graduated 31 students in June of 2010.

Those students came from either the two-year Boatbuilding and Restoration program or the one year Marine Systems program. Come 2011, there will be graduates also from the new, one-year Composites Technology program that launches in September.

There are no prerequisites to enter the Boatbuilding and Restoration track.

There are no prerequisites to enter the Composites Technology track.

Poston, however, believes there is good reason to start by learning plank on frame. I was taken by his passion for this, and I want to share, so here we go. Poston says, “People wonder why an ancient craft is relevant, but let me tell you, laminating a boat is a cakewalk compared to putting a garboard into a Concordia.

“Our students draw each boat full-size on the lofting floor, in three views—that proves the fairness—and then they draw it to scale. Then they move on to patterns for the transom, for example, that allow them to design the steering system. 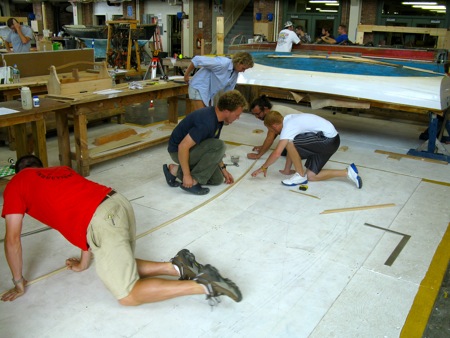 “The student controls the shape through the lofting process. If you can’t get the lofting right, you’ll never get the boat. This translates to grp, metal, any material in boatbuilding. Ask any of our first-year students why they’re here, and I don’t think they will tell you that. But the people who graduated four or five years ago know it very well.”

“To prepare someone from point zero,” Poston says, “we have to have repetition. No one gets it on one time around. That’s why we have a two-year program, with progressively complex challenges.”

As we noted in our Part One story on IYRS, the second year also focuses upon estimating and bidding, with the aim of creating a successful professional. Poston says, “They learn that on any job, the labor is 4-5 times the cost of materials. We show them how to function in the real world, so they can build a profit margin into a contract. We force them to analyze why one guy’s estimating $60 thousand and another guy’s estimating $40 thousand for the same Herreshoff 12.5.” 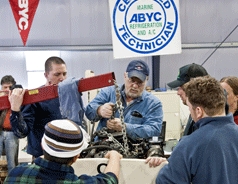 Boatbuilding and Restoration classes are taught at the signature IYRS facility on Thames Street in Newport, Rhode Island. Systems and Composites are located up the road in Bristol. (Systems including engines, gearing, electricals, pumps, tankage, LPG, firefighting, etc., to prepare students for American Boat and Yacht Council certification.)

Expanding the range of offerings is part of a long-term strategy to make the school self-supporting, Poston says. The school was initially funded entirely by a few benefactors. Now it is 50 percent self-funded; the goal is to get to 100 percent, without, of course, imagining a time when generous benefactors will not be warmly appreciated. Poston figures it would take five or six effective programs “to develop a business model that would take over from philanthropy.”

Classes are taught by industry professionals. “We do teach people how to teach,” Poston says, “but if it’s the right person, there’s an inner teacher that just comes out.”

The International Yacht Restoration School presents its own story at IYRS.org