The big show was on San Diego Bay, right off the Broadway Pier, but for those who found it, the big WTF was tucked into Scripps’ Nimitz Marine Facility on Point Loma and scheduled for sea trials soon. Lots of interconnectedness, and more later . . . 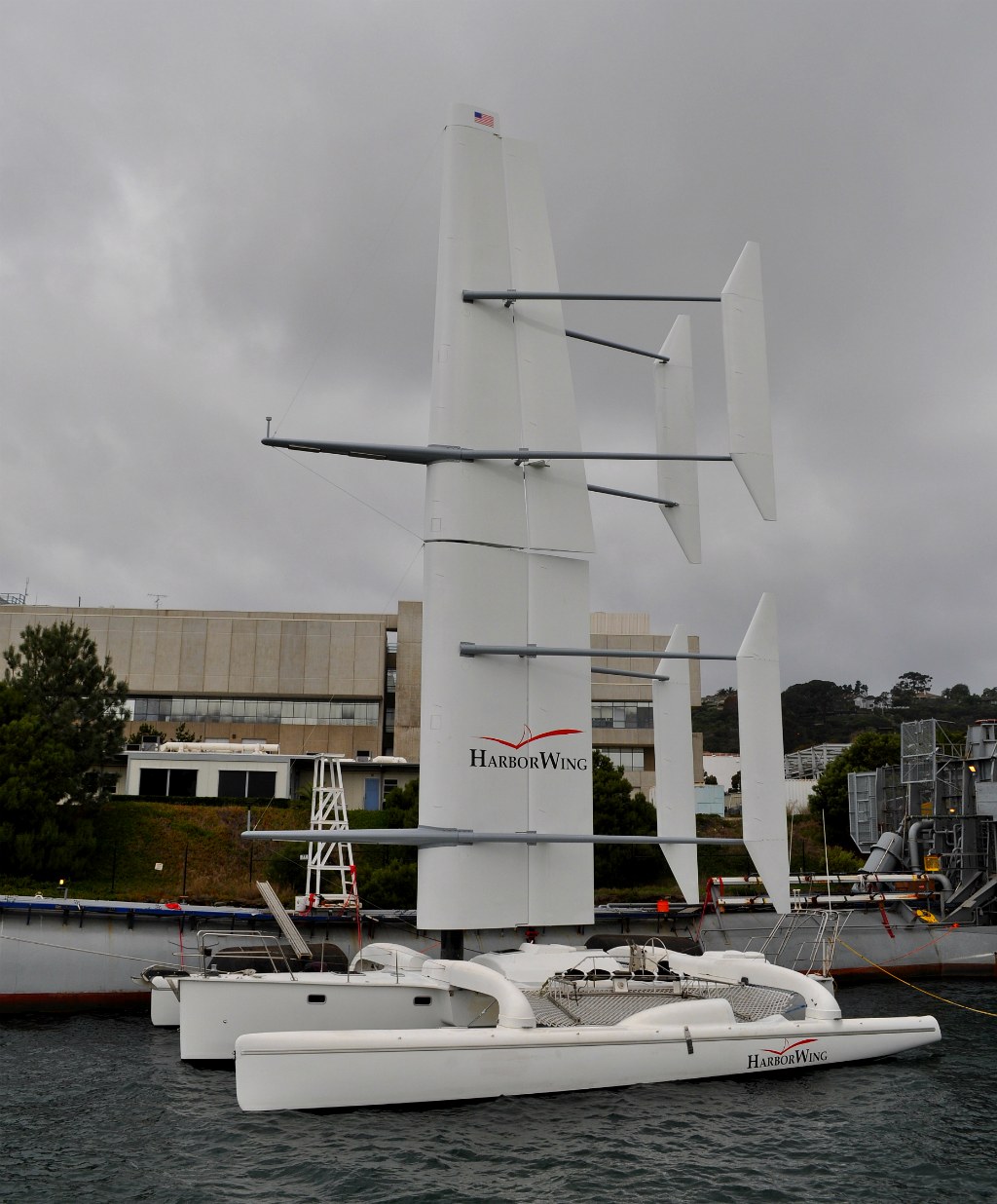 I keep forgetting these races are horseshit.

I’ve seen some exciting racing at the America’s Cup World Series in San Diego, and I’m a guy who can’t usually sit still to watch a whole sailboat race. A race for the America’s Cup, yes, but this is not that, and yet—

And yet, I keep getting caught up. There’s the match racing back and forth, and when the breeze is on, the fleet racing is just plain hot.

So, the grand experiment is working, and I guess these races are not horseshit at all. Vincenzo Onorato spoke the truth as he bowed out of AC34, and it went something like, “The international economic crisis, with the difficulties of finding sponsors, is the only true, real enemy of the next America’s Cup.”

You could talk the thing to death, because the development of new forms of racing, new technologies, and a hoped-for new audience is not perfect, not complete. Teams such as China and Korea are still betting on the come. But we’re only three events deep, less than a year since the prototype AC45 hit the water and much less than a year since the first test of the augmented-reality graphics.

I didn’t go to the racing in Cacais or Plymouth, and I didn’t pay close attention, even though I care about the outcome. The big picture outcome. Not who wins the boatrace at this stage.

Now I care because now I see. The America’s Cup World Series looks good to leverage the America’s Cup brand and with it build the international catamaran circuit that Russell Coutts and Paul Cayard tried to launch years ago but couldn’t. Couldn’t, because it was not the America’s Cup.

And so, these races are the most important thing going in our sport.

There is a traditionalist vein, worthy of respect, that cringes at the thought of the America’s Cup as a “brand.” I get that. I sort-of share it. But I’m looking forward, not back.

1) Iain Murray is correct that, “The AC World Series is growing legs of its own.”

2) Richard Worth is correct that, “Three months ago the America’s Cup World Series didn’t even exist, but we have 30 broadcast partners already. We have little left to prove; what we can do is improve. We can go back to Europe with a fully-formed sports property.”

Think Naples in April, Venice in May.

And I wonder if, no—I bet you—I doubledog bet you there were as many people from Northern California here to watch the races as there were from Southern California. The road show moves on to Naples, Venice, and Newport, Rhode Island in 2012. But I’m ready right now for August and AC45s on the San Francisco cityfront. I can already imagine the spectacle. Terry Hutchinson and company took me along on Artemis for the Wednesday speed trials, and when these boats accelerate off the wind the sensation redefines thunder.

Redefines, because it isn’t loud. 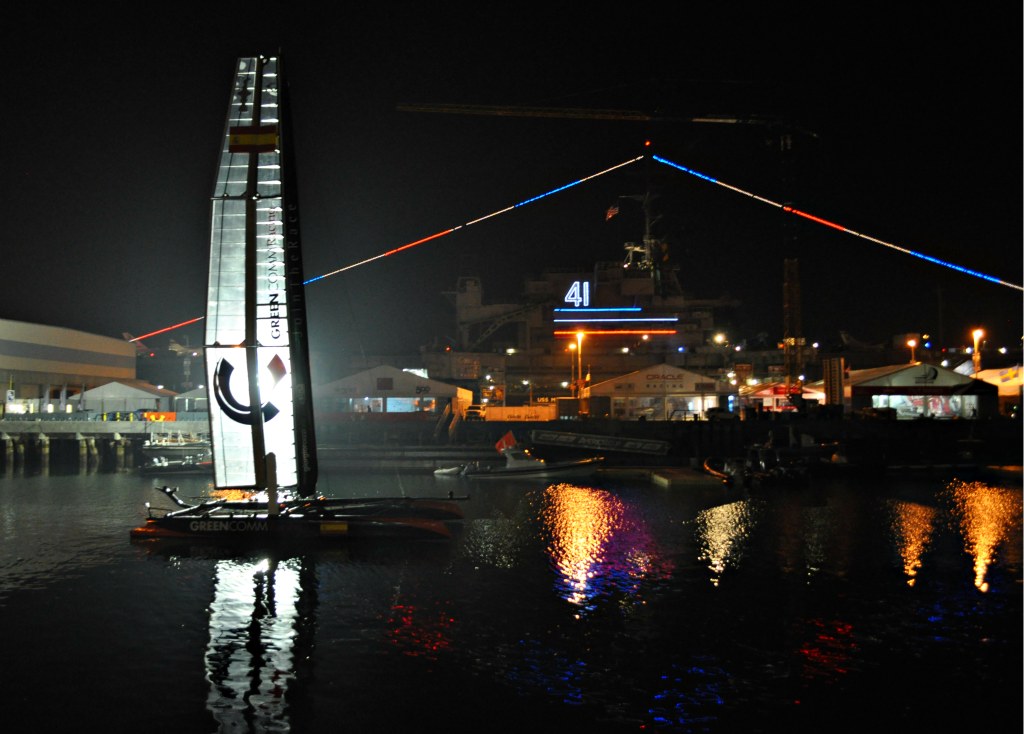 No, the wings don’t have to come down at night. With the rudders angled-off at 90 degrees or so, here is the Spanish challenger, GreenCom, weathervaning on its mooring. Photo by Kimball Livingston

3) And, finally, Dean Barker was correct to respond, when he was pushed to say whether New Zealand will maintain this format should it win the Cup in 2013: “The next two years will tell us that.”

Couldn’t have said it better myself, but I think I know the answer.

I suppose I should mention

Oracle Racing, with Jimmy Spithill driving and John Kostecki on tactics, won both the match racing and the fleet racing at San Diego, but it didn’t come easy. Surely you’ve already found the story at americascup.com, but if not, now you can.

Been to the gym lately?

Race Management CEO Iain Murray is fond of reminding people how hard the crews are working on the AC45s, deploying sails and recovering sails on short legs, dropping and lowering daggerboards, trimming, maintaining 95 percent of a maximum heart rate for a 20-minute race . . .

Elvstrom invented the concept of sailor as athlete, and now, “We have one particular Olympian in the fleet who has been tested for ten years and has never measured a heart rate over 122 beats per minute,” Murray said. “In San Diego, he has hit 197 three times. And here’s umpire chief Mike Martin, a 505 world champion and 18-foot skiff world champion in his own sailing, telling us, “No one anticipated the physicality of sailing these boats.”

The new America’s Cup technologies are very cool, but humans have their human concerns. There is the celebrated electronic system that tracks a boat’s position down to a couple of inches. It could be used to automatically assess a penalty. But it isn’t. Mike Martin says, “We didn’t want the computer to make the call. It’s a philosophical approach.” And so the humans in the umpire booth study the display, take opinions from umpires following the boats in jetskis, and then make the call.

Martin says, “Here’s one example of why. In maneuvering, you have to give the other boat room to keep clear. The computer doesn’t know if the crew of that other boat is making an effort to keep clear or not. So we have those people out there on jetskis.” Using their eyeballs.

Add exception: OCS at the start is determined electronically, period. It’s hard enough to judge the starting line with monohulls approaching at six knots. With double-hulled boats, each with a prod out ahead, storming in at 20 knots, you really need technology you trust, Martin says: “If they’re four inches over, the system calls them out. If they’re four inches safe, it lets them go.”

If it works, don’t fix it

The standard procedure for standard match-race umpiring is for two standard umpires in a standard chase boat to each assume the role of one of the boats and maintain a running dialogue about who’s doing what, and why, and who is in the right, and why. And then, if there is a foul, they call it.

“That system works,” Mike Martin says. “So we’ve kept it.” In the updated version, of course. Now they’re watching from the video booth.

Technology in beta can fail

There was that match between Artemis and Aleph where the race committee “lost the boundaries” of the course and abandoned the race. It was an important race because it determined which would emerge from the losers’ bracket to join the final four in the match race finals. And it was important because Artemis had outfoxed Aleph—which had gone 3-0 earlier in those sudden-death sail-offs—outfoxed them in the prestart, then did, and held them out of the box they were obligated to enter and forced a penalty that put Artemis well ahead. Until Aleph split. Until the wind on the race course reconfigured itself to make the Aleph side a winner. And then, no boundaries. Everything is marked electronically, including the edges of the race course. Cries from Artemis, “We’re a dark boat!”
Technology maestro Stan Honey never misses an opportunity to remind us, “There will be failures.”

Leaving open the question (there will be meetings) of how much redundancy is enough.

And there was that moment in the rain in the first weekend when Stan “lost” four of his committee boats.
Gone.
Disappeared.
Did they sink? Did the technology fail?
Panic time.
(Psst: they were under the shelter of the wide, out-reaching deck of the aircraft carrier, USS Midway, keeping out of the rain.)

Live the adventure. Honor the legend.

You can’t get away from it. The start of a match race is critical. You can take America’s Cup teams out of monohulls, you can reconfigure to a reaching start, you can make the first leg frantically short, but you can’t make it so’s the start is anything less than—did I mention?—critical.

In the first three of Thursday’s sudden-death eliminations, I saw races pretty-much determined by the first-mark turn, itself determined by who got the jump at the start.

One morning earlier, Race Management CEO Iain Murray briefed the press on his plans for the week, and the lead-off question in Q&A addressed the grousing from a couple of skippers about the difficulty of winning a reaching start. Murray wasn’t buying it: “A start here is important, just as in any race. We’re still inventing how we do this. We’re learning, and if the rules need changing, we’ll change them. But we’ve had six [demonstration] fleet races with five different winners, and I don’t feel bad about that.”

Olympic gold medalist Johnnie Moseley, in town to host Oracle Racing’s introduction of luxury chronograph maker and returning sponsor TagHeuer, figures, “Snowboarding re-energized skiing. There were people who were against it, there were places that wanted to ban it, but really, what it did was re-energize skiing. I see the same thing happening now in sailing.”

And now I leave you, San Diego, a true sailors’ town 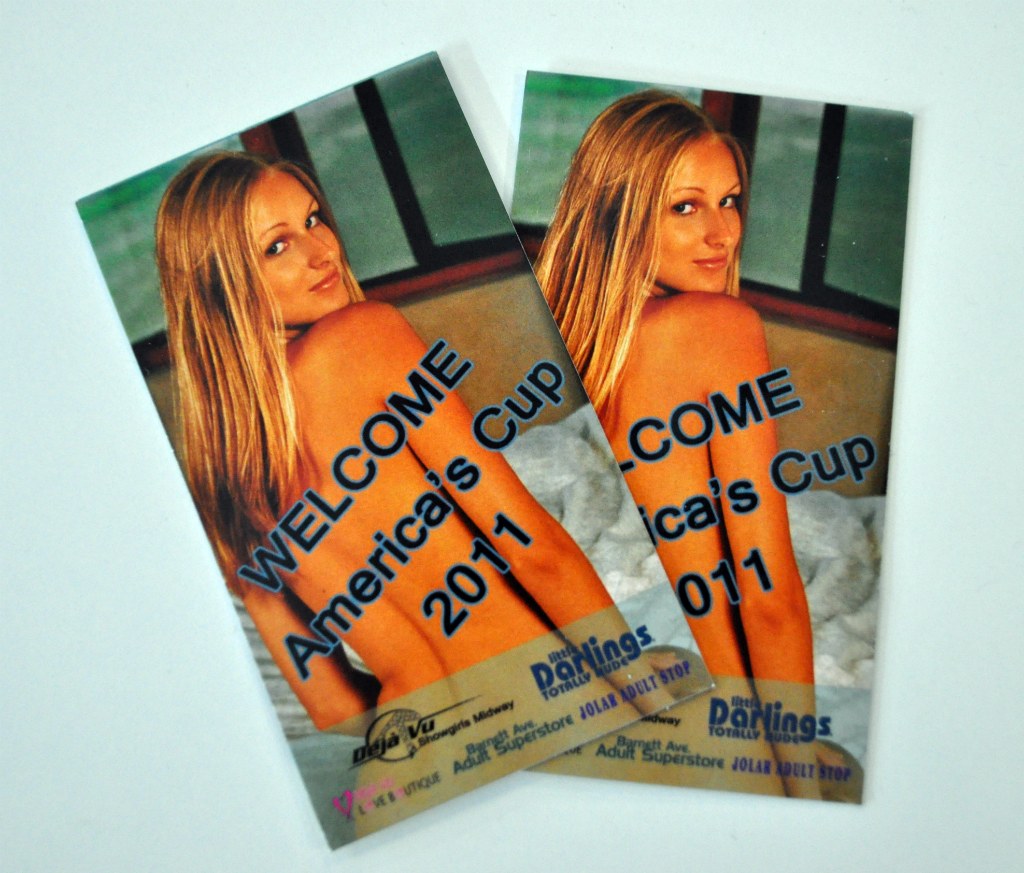 Their original project was a remotely-operated surveillance vehicle aimed at a military market, but Harbor Wing Technologies also has designs on the commercial market. The idea is that human reaction time is the key limiter to sailing large multihulls on the ocean. When the puff hits, the human just can’t get to the sheet in time, unless said human is a racing crew holding an uncleated line. But a computer (with massive redundancies) never sleeps.

I’m not going deep on this, at least not here, not now. But it’s a fascinating project, with connections to the Morrelli & Melvin design team and consulting from Stan Honey. The wing pivots 360 degrees and has separate upper and lower sections, so it feathers itself at the dock. `No need to worry about “taking the wing down at night.” The sections . . . 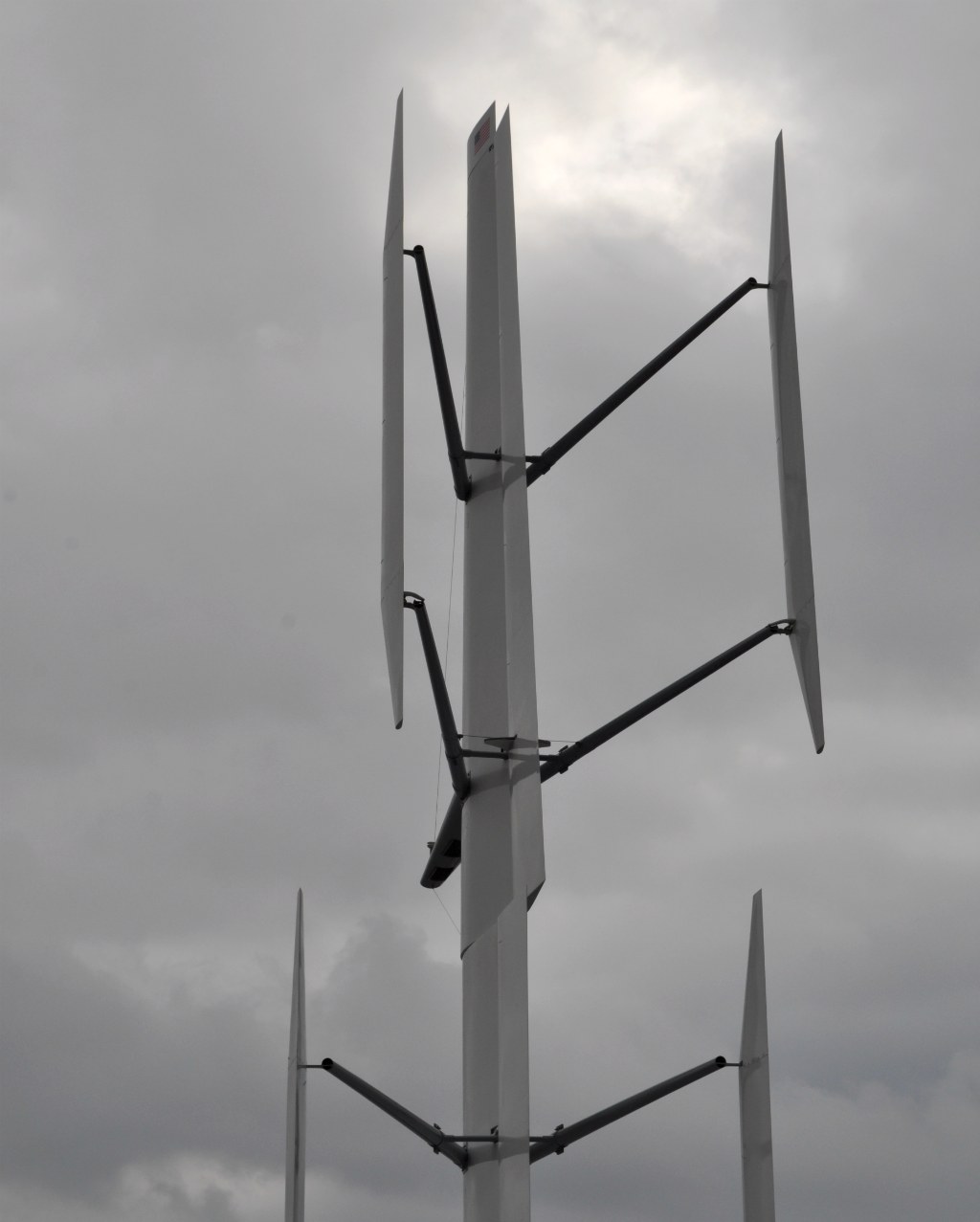 You won’t be able to get inside Scripps’ Nimitz to walk up to it, but a boat will get you close. Or you can see it from a medium distance by driving to the end of Shelter Island, out where the Customs Dock is located, and looking across the channel. They’ll be sea-trialing the software too.