Sailmaker, designer, builder, skipper of 1974 America’s Cup defender Courageous, Ted Hood in 1994 bought back his 1959 ocean racer, Robin (“Sue, my wife, wouldn’t let me name any of the kids Robin, so it had to be the boats”) for $4,000. If anybody needs a reality check regarding the cost of old, wood boats, consider that this one, in Ted’s hands, had been fully restored, was still winning races, and over time had soaked up about $200,000. Ted kept her dry in winter, but not warm. 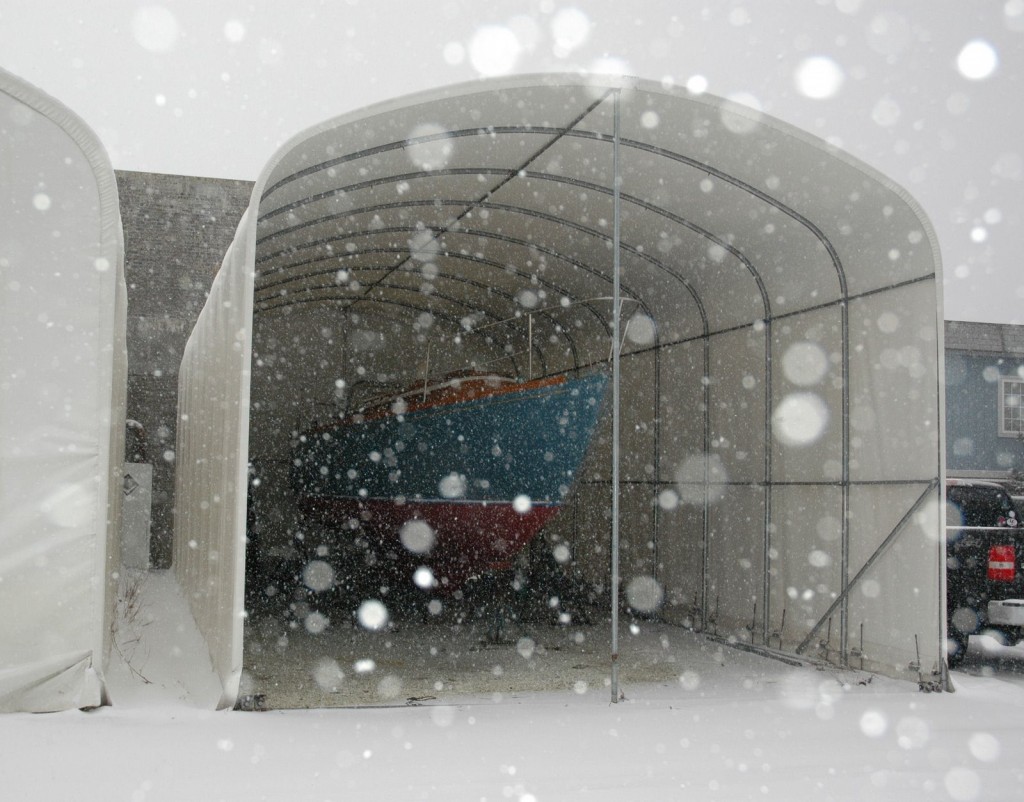 This was taken while driving through a Massachusetts snowstorm toward the Mount Hope Bridge . . . 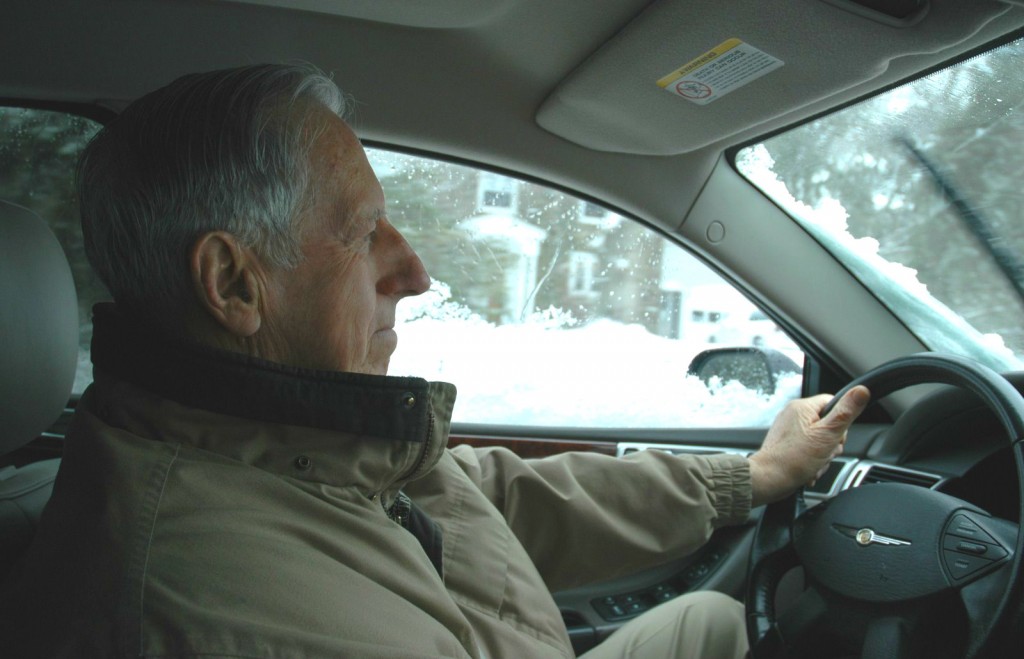 To the Herreshoff Museum in Bristol, where I made him pose with his own photograph in the gallery of America’s Cup winners. 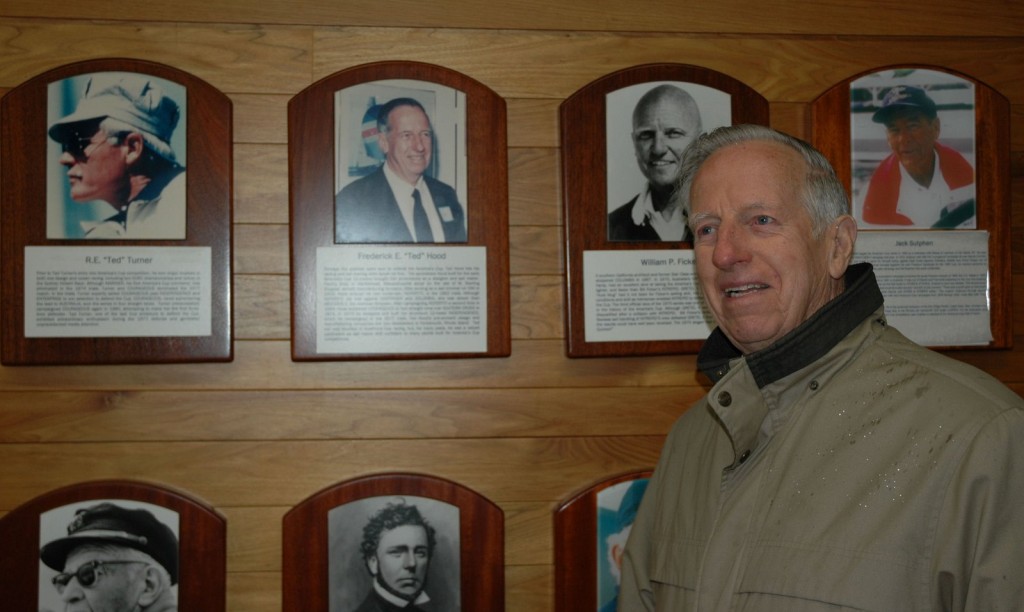 It will always be with me that I experienced Herreshoff’s through the eyes of Ted Hood. 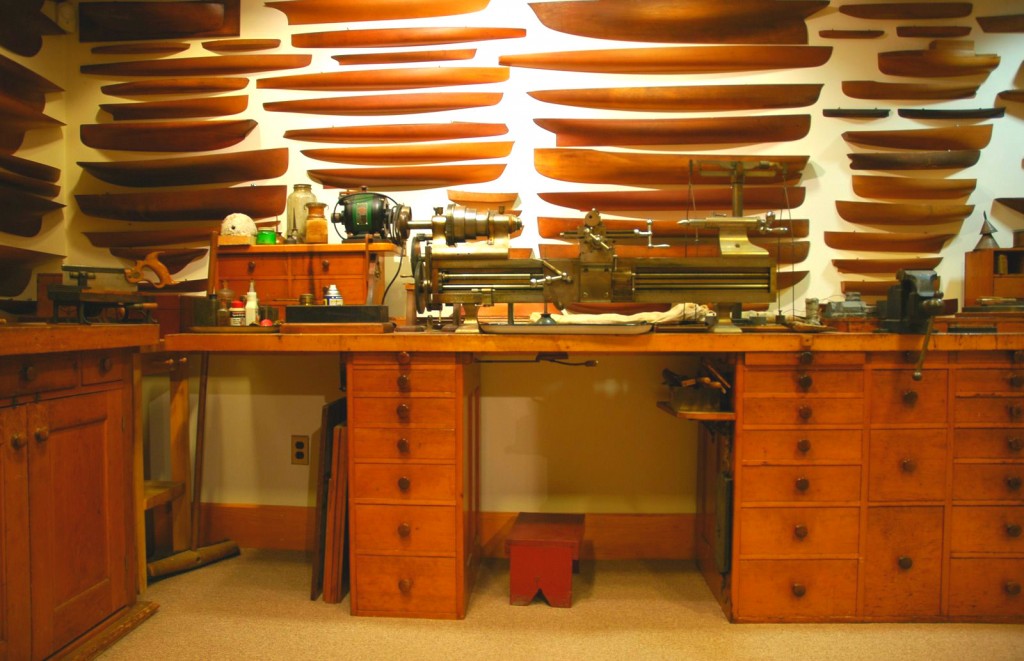 Later, again in a car with Hood, we were looking up through the windshield at 12 Meter US19, Nefertiti, on a cradle on the hard. The snow was still coming down and Ted pointed to the underbody—the long keel of the day, attached rudder—and he said, “We went to the tank testing and the tank kept saying to make the keel longer, make the keel longer. So we made the keel longer. But the tank had the wrong numbers for wetted surface. When we raced-off against Weatherly [for the right to defend the America’s Cup in 1962; Ted was, uniquely, designer, skipper, and sailmaker of Nefertiti], we were faster in a breeze; they were faster in the light stuff. It came down to that. The last races of the trials were light air, so Weatherly defended.”

Mine: Even the guy who landed the big one many years later lamented the big one that got away. Ted Hood was known as a man of few words, but that’s a load of BS. Ask him, Ted, how do you feel, and you’d get nothing. But he would talk engineering till the cows come home. Watching him respond to generations-old but intelligent hardware at Herreshoff’s was a revelation. RIP, Ted.

HOW FAST IS TOO FAST?

Amidst all the hand-wringing that has gone on hereabouts we’ve lost perspective on what’s going on in the world beyond. Yann Guichard, who skippered in the AC45 racing on SF Bay in 2012, has been on the MOD circuit in Europe. Between Portugal and Ireland, rounding the Fastnet Rock and passing through often-treacherous waters, Yann and his Spindrift team did very well. I quote from a release dated June 19:

At sunrise, the MOD70 Spindrift won the second stage of the Route des Princes between Lisbon and Dublin-Dun Laoghaire. Spindrift crossed the line at 05:37hrs and 48 sec (local time), after 2 days, 15 hours, 37 minutes and 48 seconds of a race that was thrilling, challenging and as eventful as you could hope for, as they were constantly in contact with their opponents. Yann Guichard and his crew; Erwan Tabarly, Pascal Bidégorry, Jacques Guichard, Christophe Espagnon Xavier Revil, despite the fatigue, wore broad smiles in the fresh Irish morning. They achieved their goals in all respects because this victory propels them to the top of the overall standings ahead of the inshore races scheduled for Saturday and next Sunday in Dublin Bay.

And then, more recently, in one of those inshore races: