Wow, less than a week after San Francisco went happily and harmlessly nuts over the Giants’ victory parade we have a majority of the Board of Supervisors co-sponsoring the Mayor’s Host City Agreement between the city and America’s Cup authorities, and on Tuesday night I found myself at a table in Betelnut on Union Street in a celebration that confirmed what I’ve believed for months. That Larry Ellison’s team has been working earnestly and tirelessly to defend America’s Cup on San Francisco Bay. That the city has more than matched their efforts. That the payoff will be tremendous, easily justifying Gavin Newsom’s description, “the chance of a lifetime.”

Niccolò Porzio di Camporotondo was at the table—he works for the Event Authority—and he was emphatic: “We must not fail!”

Because, you see, these people really do believe that San Francisco Bay is the place where their vision of a new America’s Cup will soar. It’s not just rhetoric when they talk about the natural amphitheatre.

And regarding their vision of a radically new event in 72-foot wing-sailed cats, I figure you can gauge the health prospects of America’s Cup by how many people go to the time and trouble to write to the forums to pronounce the Cup dead and expend their breath going on and on and on, explaining at great and heated and repeated length why they’re just not interested in the America’s Cup any more and that’s it and they’re going to stop thinking about it and that’s FINAL. I say again, baby, you can kiss my tail lights goodbye. (And see you at the next Cup.)

In 1851, that Yankee schooner represented the epitome of technology. What I hear is the America’s Cup being dragged kicking and screaming into the 21st century. 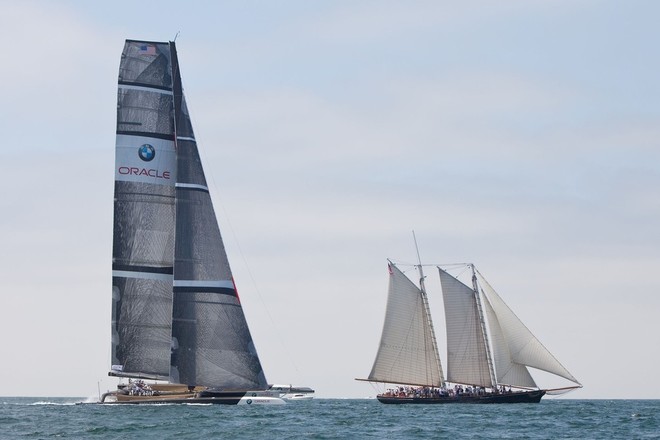 Photo, almost for sure, by Gilles Martin-Raget during training in San Diego

The other message you should get from this is how much respect is due all the parties involved.

Mark Buell, Chair, America’s Cup Organizing Committee, on the efforts of the Event Authority: “The tone they set from the first meeting was focused on solving problems, not making demands.”

Tom Ehman, Director of External Affairs, BMW Oracle Racing, on city staffers and all of the people brought in to bargain on behalf of the city: “These are smart, dedicated people. They’re deal makers, not ball breakers.”

Kyri McClellan, AC project manager in the Mayor’s office, and Monique Moyer, Director of the Port, were singled out, but the praise was spread broadly, even to the legion of lawyers who had to work through the if-then clauses. Buell again: “Somehow, the people who seemed like obstacles in the beginning, by the end, had been disappeared.”

And you should know, none of this was said for my benefit. But there was a point at which I realized, this was the theme of what was flying around the table.

It was Ehman who gave me my headline, “the stars align,” and I wish I had the quote but it just wasn’t that kind of night. Something about all the elements coming together in just the right, unpredictable way. John Coté did a nice, careful job, writing in the San Francisco Chronicle under the headline, S.F. is 1 of 2 finalists to host America’s Cup, but I don’t have to hedge my bets. A few more details, a few more if-thens, a few more weeks.

Niccolò Porzio was course marshall at the matches in Valencia, and he has been in town for weeks exploring the piers and the waterfront. He liked Betelnut’s Pinot Noir just fine, and he said, “As a course marshall I have strong ideas on how to involve the superyachts that will come for the races. We’ve had this vision of the stadium—the Romans filled the Coliseum with water to stage sea battles—and on San Francisco Bay one side of the stadium is already there, the cityfront. We’ll build the other side of the stadium by lining it with the big boats that the America’s Cup will attract. In Valencia we were told to keep the spectator boats at a distance. That’s the old way. But we don’t want the raceboats sailing off miles away out of sight. We want them center stage. San Francisco Bay is the place to do it. We must not fail.”

Oh, btw, headlines like “Giants vs. America’s Cup” are sure to grab attention, but there doesn’t seem to be much substance there. And the port is going to favor maritime usage, and I see that I just got an email from someone who has the inside line on how the America’s Cup is going to Rome. Heh. Life goes on.

It’s worth noting that plans remain fluid regarding what goes where. The conceptual drawings released by the Mayor’s office earlier this fall reflect the ambitions but not necessarily the shakeout. What doesn’t seem likely to change is the preference of the America’s Cup Event Authority to base the teams at Pier 50, across McCovey Cove from AT&T Park.

Larry Ellison, under the colors of Golden Gate Yacht Club, won the Cup on his third attempt, and the gist of the situation now is that we use Ellison’s fortune made in software to rehabilitate piers that are unused and crumbling (I hear figures in the range of $150 million). In return, Ellison gets long term leasing rights and a shot at eventually recouping his investment.

For the deteriorating southern waterfront of the Port of San Francisco, there is no Plan B.

In addition to Mayor Newsom, Board of Supervisors President Chiu and Supervisor Mirkarimi, the Host City Agreement was also initially co-sponsored by Supervisors Michela Alioto-Pier, Carmen Chu, Bevan Dufty, and Sophie Maxwell. The San Francisco America’s Cup Organizing Committee is also a party to the Agreement.

Hosting the America’s Cup in San Francisco would bring a beautiful backdrop, predictable winds, world-class visitor amenities and enormous spectatorship opportunities that the natural marine amphitheater of the San Francisco Bay offers. In order to provide the Team with the highest level of certainty possible regarding a number of important issues, including the venue plan, key financial terms, sponsorship opportunities, schedule and event logistics, City staff have negotiated host city agreement with the team for endorsement by the Board of Supervisors.

“We as a City are coming together to put into place the commitments necessary to host the 34th America’s Cup in our Bay waters,” said Board of Supervisors President David Chiu. “The economy of the entire San Francisco Bay Area will benefit exponentially from hosting the America’s Cup in 2013, and we are preparing to bring this world class sailing race to our world class waterfront.”

“San Francisco is the only location for this event,” said Supervisor Ross Mirkarimi. “Having been exposed during my youth to sailing and the America’s Cup, I know we have everything race organizers need, including the expertise and will, to host the ‘World Cup’ of sailing and make this event a historic success. I look forward to the Budget and Finance Committee hearing on the Agreement on December 1st, where we will hear concrete answers to the questions of how the America’s Cup will benefit the people of San Francisco and the greater Bay Area.”

The Host City Agreement envisions the use of piers along the southern waterfront and leaves open the possibility of exploring and studying other sites if there are opportunities to deliver the facilities more quickly, using fewer resources on both sides, and further enhancing the America’s Cup experience in San Francisco.

The possible alternatives are part of the Fiscal Feasibility study and will be included in the project’s California Environmental Quality Act (CEQA) review.

Hosting the Event in San Francisco would generate significant public benefits for the City, including providing a catalyst for the repair, improvement and productive reuse of City piers along the City’s central and southern waterfront that are currently in a such state of grave disrepair that there is no other viable plan to pay for the improvements. Hosting the America’s Cup would also generate an enormous amount of economic development in a very short period of time, including over 9,000 jobs and more than $1.4 billion of new economic activity.

There are additional terms in the Host City Agreement that expand upon the concepts in the Term Sheet including a number of suggestions made by members of the Board of Supervisors and the public during the prior hearings, and they include:

· Ensuring that the Event Authority receives future development opportunities commensurate with the infrastructure improvements necessary to build world class America’s Cup Village facilities on San Francisco’s public waterfront.
· As the specific plans for the 34th America’s Cup have not been finalized, the parties anticipate certain changes may be made by mutual agreement prior to the execution of the Venue Leases, the Development and Disposition Agreements for the Legacy Leases and/or the Transfer Agreement.
· Ensuring the highest environmental standards and sustainability programs are used for the America’s Cup event as well as the infrastructure improvements as well as using local labor and workforce for the infrastructure improvements undertaken by the Event Authority.
· Securing MOUs from key third parties, specifically federal and state agencies with oversight and are key parties to a successful hosting of the America’s Cup in San Francisco These include: the Coast Guard, FAA, FCC, GGNRA, Homeland Security, BCDC, to name a few.
· Affirmatively stating that the Board of Supervisors and/or the Port of San Francisco will have future discretionary approvals for the execution of the Venue Leases, Development and Disposition Agreements, Legacy Leases and Transfer Agreement, as well as any potential CEQA appeals.