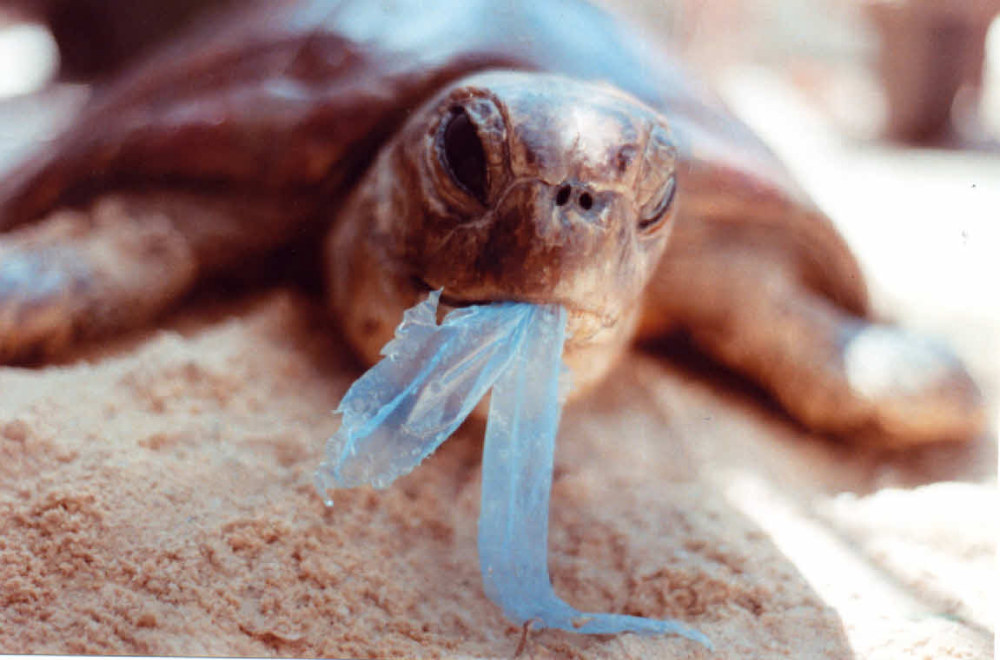 When I learned that the brigantine Kaisei has returned from its 2010 Pacific voyage in time to participate in a Parade of Sail on San Diego Bay, I was reminded of a conversation I had with Norton Smith, soon after Kaisei’s 2009 voyage. The ship’s crew and a boatload of scientists had been studying plastic pollution in the far ocean, in the Pacific gyre, sharing the expedition with a Scripps research vessel and noodling on the question of whether or not it would be possible to clean up at least a chunk of the junk.

The man was not optimistic. 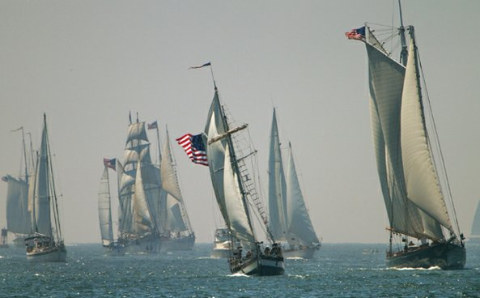 Perhaps if there really was “an island of plastic as big as Texas” out there, as some people imagine, it would be possible to harvest it at a profit or, at a price, for the common good. Instead, we’re talking about something even more insidious, steadily-degrading tiny bits that don’t quite go away but come back to us, presumably, through the food chain.

Sure, you see some big chunks. But, “We filtered down to one-half micron,” Smith said. “We wanted to know about the nano-sized particles that are out there. Nobody had done that before. It’s crazy that we’ve invented this substance that is marvelous but doesn’t go away, and so much of the time we use it once and throw it away.”

When you throw something away, where is “away?”

Lots of junk in the ocean washes into the various gyres, pushed in to the calm but cluttered regions at the center of tradewind circulations.

It might be helpful at this point to interject an excerpt from Explorations, published by the Scripps Institution of Oceanography: “The expedition was designed to locate and study plastic and other marine debris in the gyre. But finding the stuff wasn’t guaranteed. In some ways, the voyage would pay tribute to the grand oceanographic exploration days of yesteryear when seagoing scientists plunged into the great unknown of the ocean frontier. SEAPLEX (Scripps Environmental Accumulation of Plastic Expedition) was designed to learn something about the scope of the debris problem. It’s quite possible, [Chief Scientist Miriam] Goldstein said, that the graduate student researchers leading the trip . . . might not find any plastic in the gyre.

“But less than a week into the voyage such provisos evaporated into wisps of sea air. The plastic indeed was there in the gyre. And there was lots and lots of it . . . The thing that has shocked me and I think the rest of the science crew is just how much plastic is out there,” said Goldstein.

“During the survey in the inflatable boat, Goldstein used a quadrat, a frame that defines an area of ocean surface, to gauge the quantity of plastic in a given area. At maximum, she detected 11 pieces per square meter. “That’s a lot of anything to be out in the open ocean,” said Goldstein. “The thing I found sad and shocking was that we could see some amazing, cool creatures just below this thick layer of plastic. Here’s this very unstudied ecosystem where not many people come and there is all this stuff floating at the top that’s a sign of industrial society.”

It was special to talk to Norton Smith because I remember him as the winner of the very first solo Transpac, 1978, edging out the legendary Skip Allan. And this may strike you as quaint, my dears, but once upon a time, staging a Singlehanded Transpacific Race was controversial.

Then Norton Smith kinda sorta disappeared to a farm in Oregon. But, naturally enough, he’s been doing plenty since, just not sending out press releases about it. For example, a 60-day solo kayak trip through the Northwest Territories, and there was something about a steel ketch, now in Maine, that might do for the Northwest Passage. But I don’t think Norton would have taken the call for the sake of talking about himself. 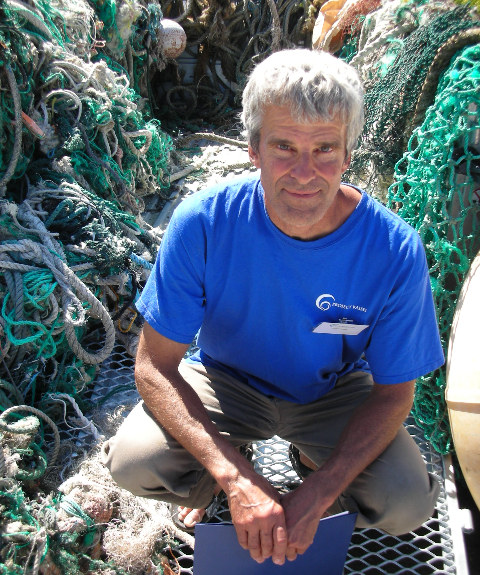 A few years back, Smith caught an NPR segment on the Plastiki project, and on a visit to California he called on the Plastiki team thinking “maybe that would be a good thing to get into; then I saw that it wasn’t happening and maybe would never happen.” 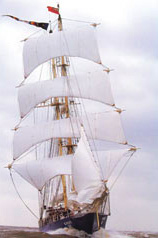 Actually, Plastiki came out fine, but only after the project was re-re-redefined and considerably delayed. Smith, meanwhile, discovered Mary Crowley’s Project Kaisei and threw himself into that, which was no minor matter. Think very large steel brigantine, built in Poland, rewired at some point in Japan, and it had to be made compatible with US standards, with lab space for the science team. “I don’t have a degree in anything,” Smith said, “but I have enough background in science—I started as a physics major at Johns Hopkins, but I’ve always been distracted by sailing off to somewhere—anyway, I have enough background to act as an intermediary between sailors and scientists.” From Mary Crowley’s point of view, he pretty much rebuilt the ship singlehandedly and if that’s an exaggeration, it’s an exaggeration that tells a truth.

On that 2009 voyage, Smith’s particular interest was plastic removal. “I built four devices,” he said. “They were designed to passively collect debris using swell or current, because towing a net is not going to work at a commercial level.”

In theory, old plastic can be converted into diesel, for example, but I’ll assume I don’t have to explain in detail why there is no obvious, immediate, commercial application for sending ships out to the middle of the ocean to scoop up plastic bits for processing.

Smith put it this way: “There was one method that worked well, an artificial beach made of plywood attached to a sea anchor. But is it commercially viable? I would say no. You have the capital costs, the fuel burn to get on station, and the plastic you collect is badly degraded and just doesn’t have the mass. The real solution is to stop making plastic that doesn’t degrade, to stop using this miracle substance in single-use applications, and stop dumping stuff in the ocean.”

The 2010 voyage of Project Kaisei was aimed at furthering the investigation into collection, for example. The ship is only just returned, so it is too early to expect a report, but it is troubling to read other reports that remote islands have roughly the same accumulation of debris as industrialized shorelines. It was debris on South Georgia Island in the Southern Ocean that inspired one-time round-the-world record holder Ellen MacArthur to set aside record-seeking for environmental activism: She said: “I never thought that anything in my life could eclipse sailing, I didn’t think it was possible. But after being in South Georgia, the more frightened I got. I realised that on land we don’t see things as precious. We take what we want. This world, that I thought as a child was the biggest, most adventurous place you could imagine, is not that big. There are an awful lot of us on it, and we’re not managing our resources as you would on a boat because we don’t have the impression that these resources are limited. When you sail on a boat you carry a minimum. You don’t waste anything. You don’t leave the light on; you don’t leave a computer screen on. And I realized that on land we take what we want. You’d never do that on a boat. If you need some kitchen roll, you tear off a corner, not a whole square. But someone somewhere thought that a perforated line is what everyone needs.”

Almost simultaneously with Kaisei’s return to California, the California legislature shrugged off an opportunity to ban plastic bags, per this account at the Huffington Post.

Both houses of the legislature did, however, vote unanimously to invite America’s Cup 34 to the waters of San Francisco Bay. 2014 will be a banner year.

And the Orange County Register is running a jim dandy pic of a green flash HERE.

And we are following the Finn Gold Cup racing HERE
It’s major mojo downwind in this fleet . . . 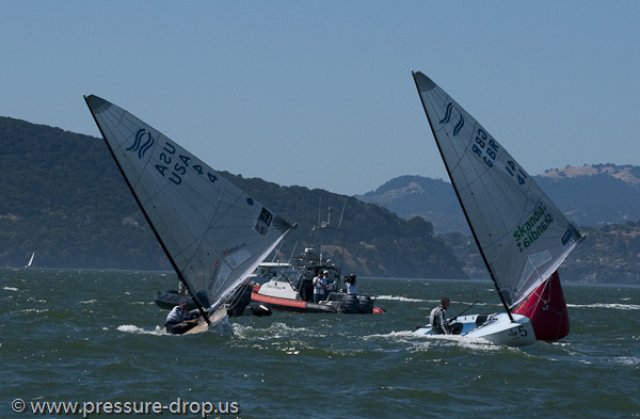 Next stop for me: Howland’s Landing, Catalina Island. Byee.