Will the Apocalypse be Televised? 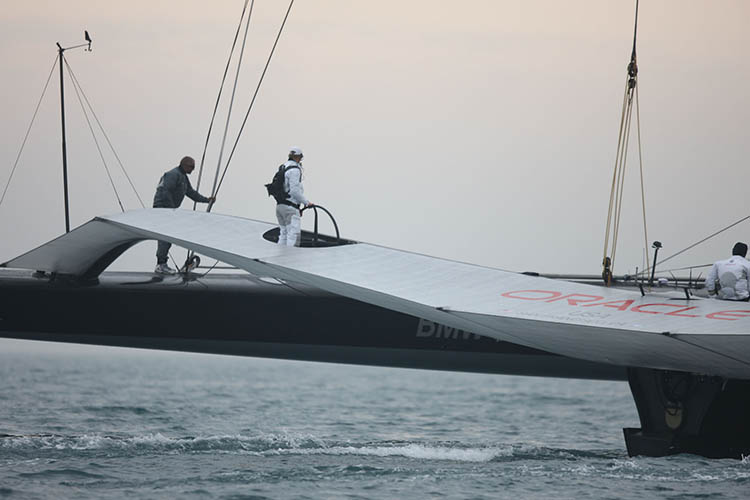 With new, aerodynamic helm stations, the BMOR trimaran (renamed USA) sailed for the first time in Valencia on Tuesday. The wing was installed and sailed, then removed in anticipation of high winds on Wednesday.
Photo from the BMW Oracle Racing Blog

I had a couple more of those conversations today. They start with someone asking, “Are you going to Valencia?”

Darned if I know.

At this point in ’07 I was long since pre-registered at the America’s Cup Media Center, which may or may not now exist. The building, yes, but no authority has put itself forward advising me how, as foreign media, I should conduct my affairs at AC 33. Will there be press conferences? Outside of each camp, that is? Could the two teams actually meet under one roof and be civil about it? In 1988 I breathed the rancorous, poisoned air of the Big Boat-Catamaran match, and 2010 isn’t shaping up all smiley-like.

Will there be a boat to take me out to the race course so that I will have 27 seconds of watching a big multihull thingie streak by?

Will the wind limits be so narrow that the days will drag on as we wait for a racing window?

Will the apocalypse be televised?

I’m figuring that only helicopters will have a worthwhile view of the match, and maybe not even helicopters. Remembering the huge splits we saw in 2007, if these guys split tacks, they won’t even be on the same patch of water. We could have Helicopter Squadron A on the right and Helicopter Squadron B miles away out of sight on the left. Think Race One, spec’d by the DoG as “twenty miles to windward and return.” How much leverage does that offer on the right, versus the left? The scientific answer is, gobs.

If I watch the start of Race One, I probably won’t lay eyeballs on the boats again until the finish, which is already a day’s work, and if the breeze is offshore, as it very well could be, that start/finish line will necessarily be twenty-plus miles out into the Med. In February. Not exactly “the season” in the south of Spain.

For me, AC 32 in 2007 was an exercise in life well lived in a foreign country. This looks like a combat mission. 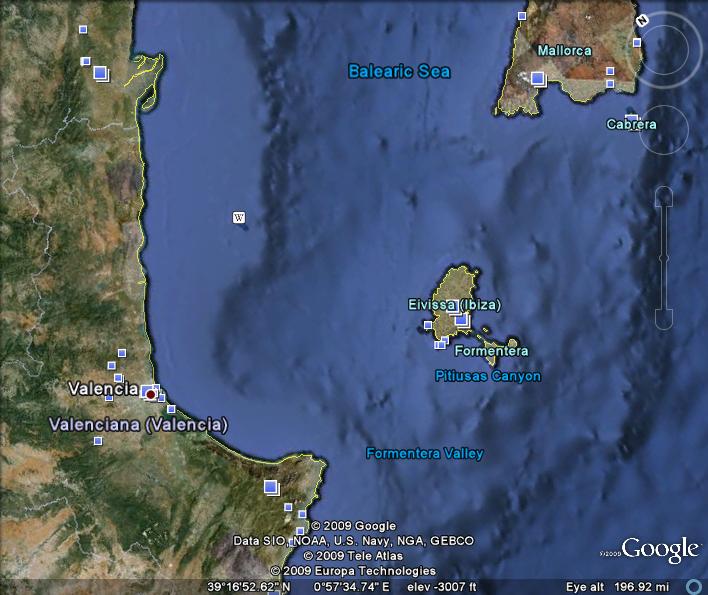 Valencia grew alongside a river on a shallow plain. The immediate waters continue shallow, but at just about twentyish miles off the beach, there is a sharp drop, from 450 feet or so to 1000+ and then 2000+ into the Formentera Valley that runs between the mainland and the isle of Ibiza, 90 miles away.

Methinks the Race Committee will earn its pay. Do they anchor marks in that stuff or use boats and technology to maintain station? Questions, more questions.

Back in 2007 I moved in, lock, stock and barrel, to an apartment in the old city of Valencia and savored everthing that is special about life in Spain. Tapas at midnight. Festivals in the plaza. I packed along my black tie outfit for the America’s Cup Ball and I packed along my foulies on accounta how that’s how I live. I’ve yet to hear any rumblings about a 2010 America’s Cup Ball and can’t imagine how that rough beast would ride. What we know we won’t see, for example, is a Louis Vuitton awards dinner in l’Umbracle . . . 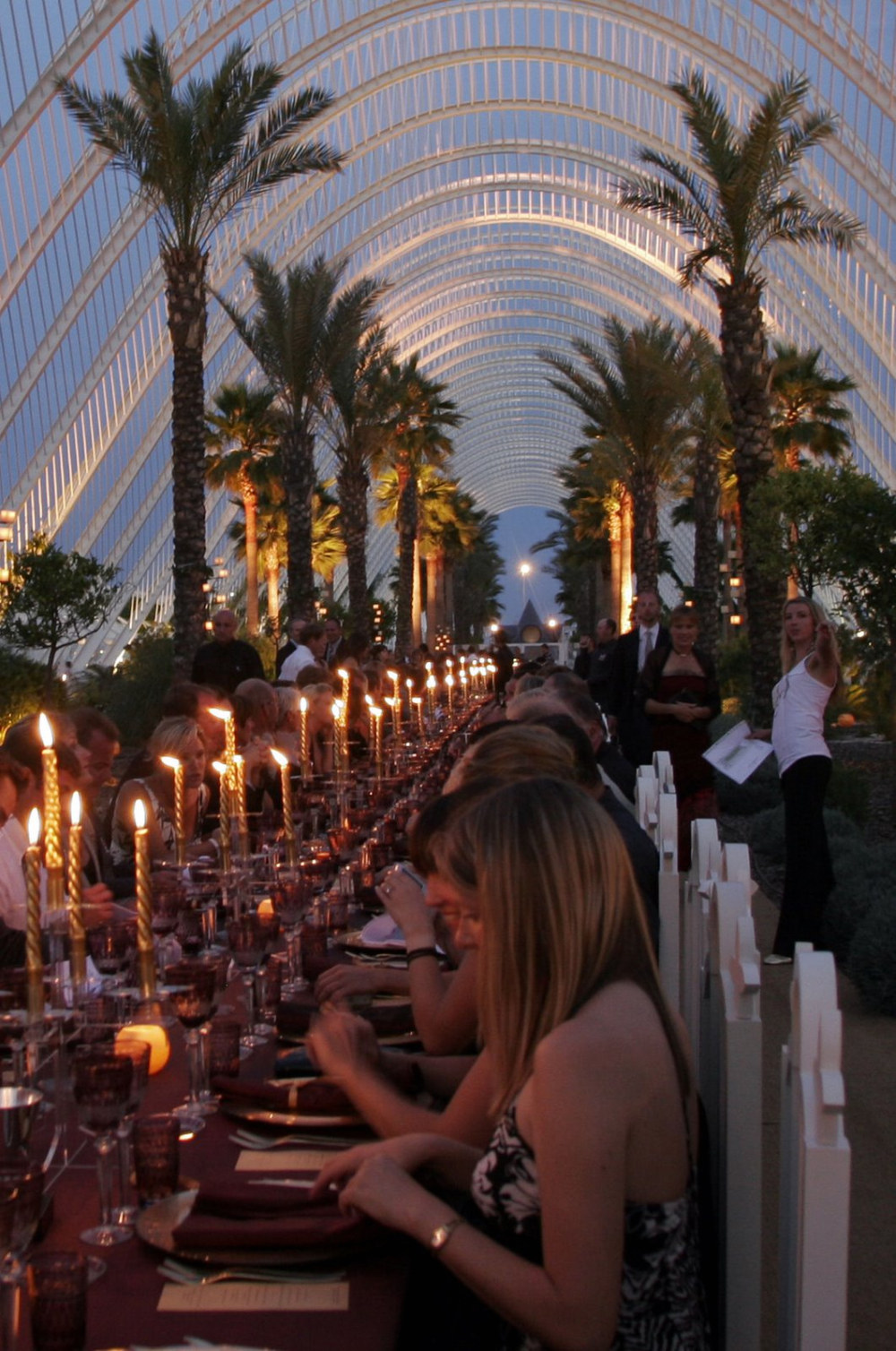 Though we’re pretty sure to see that specialty of the Valencianos, fireworks . . . 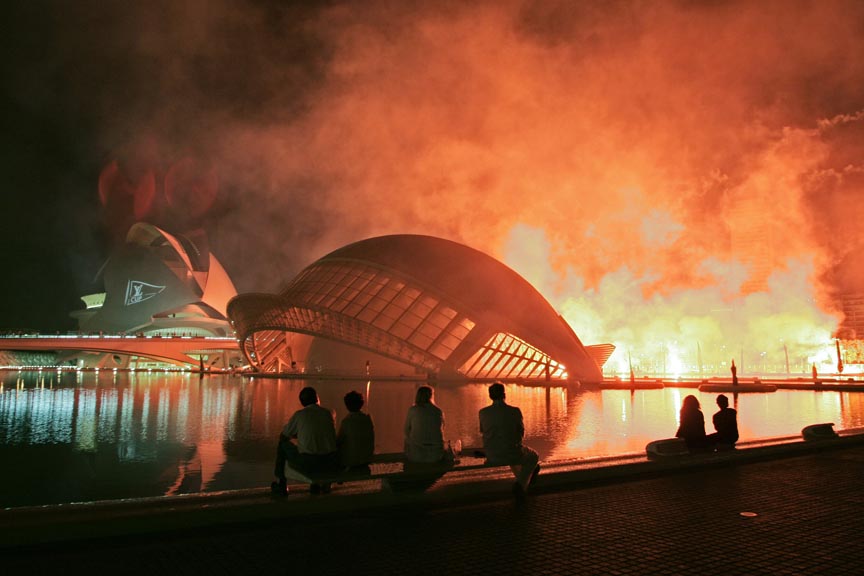 It’s too wintry for festivals such as this . . . 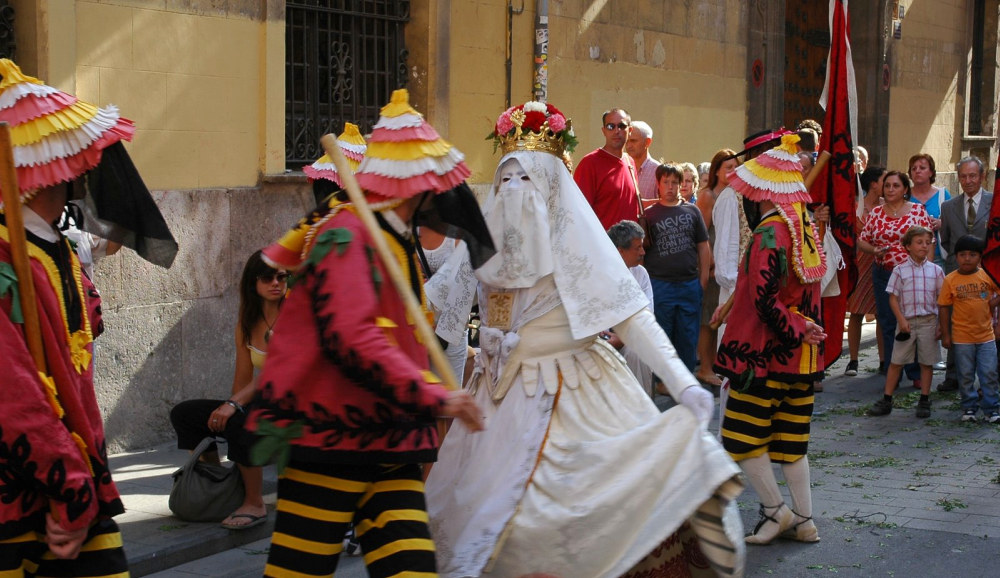 Where they storm the narrow lanes with rose petals . . . 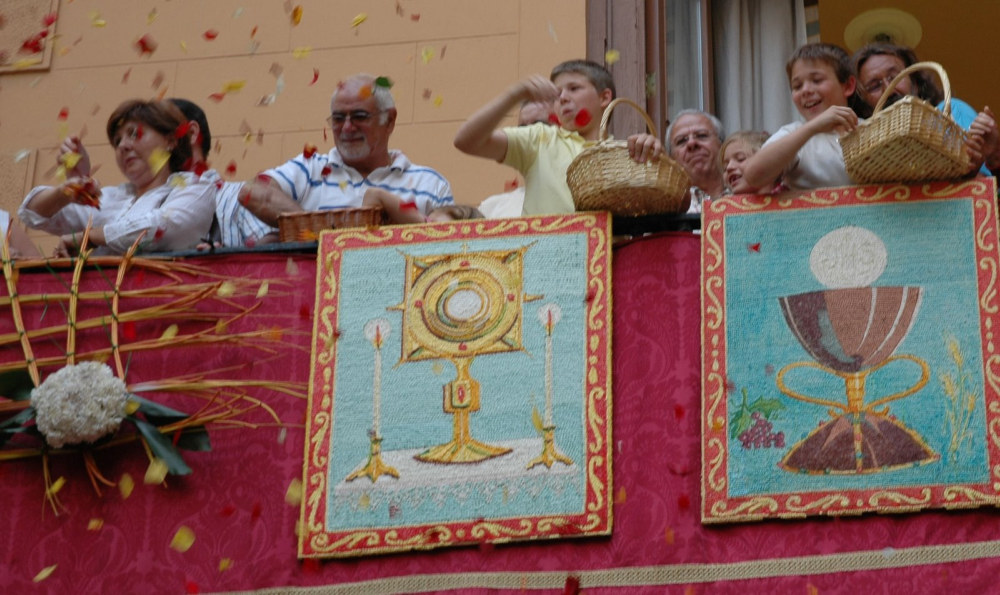 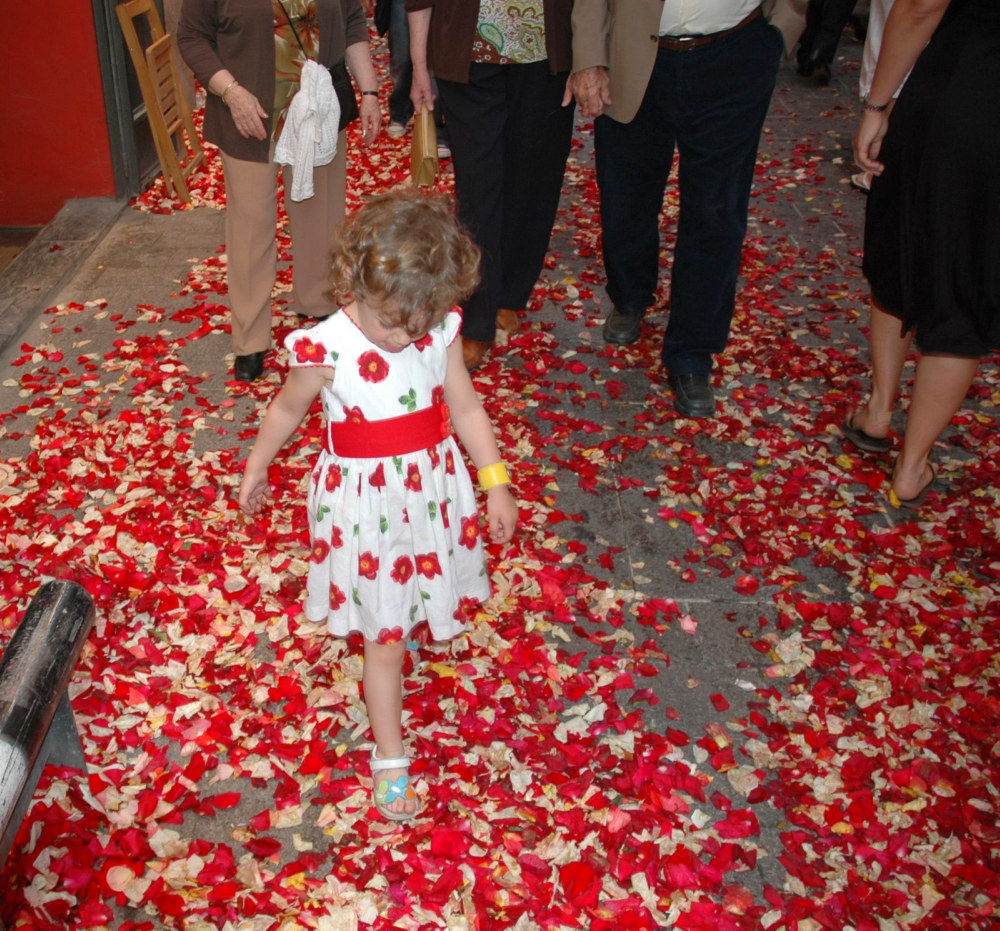 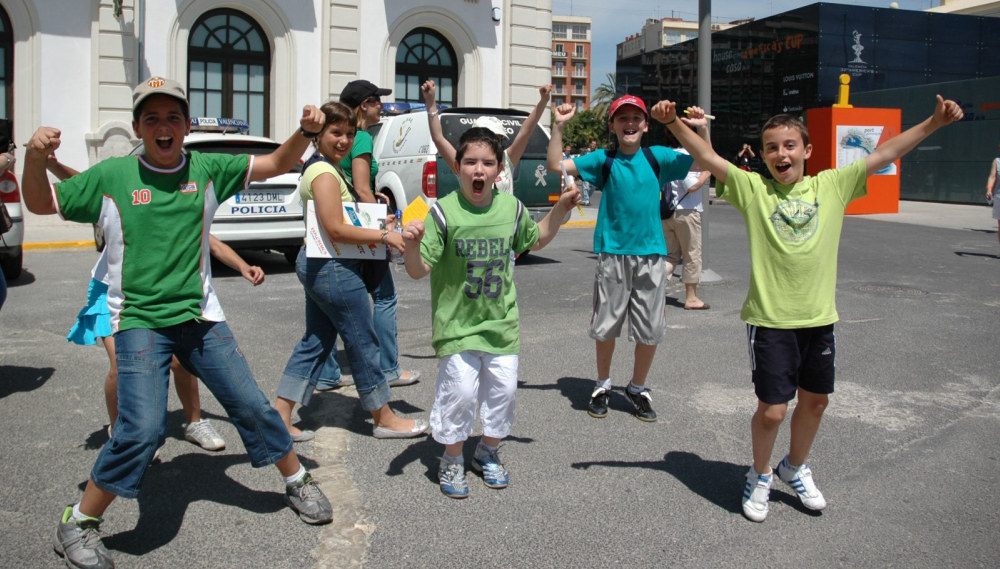 .
But I do expect to need my thermals. Maybe on the water; maybe in certain frosty receptions.

If you have experienced the good life in Valencia, you will probably find it worth your while to watch this video, called to my attention by Julia Wedekind. Shot in the Mercado. The best six-minute investment of my day: Mercado.

At BMW Oracle Racing, where a conventional mast was temporarily installed in the trimaran for a series of load tests, design coordinator “Fresh” Burns reports, “There have been a number of structural and configuration changes and all of them needed to be tested in a methodical way. So we’ve been going through the load testing, checking for noises or anything that looks unusual. But everything has gone well—a clean bill of health.”

The mast was removed on Monday. Burns said the wing would be going in soon, with the boat to sail as early as Tuesday—or not, if that feels rushed.

The Alinghi catamaran has been sailing since last week, with American Ed Baird on the helm(s), reprising his role of 2007. 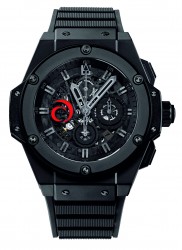 Alinghi chief Ernesto Bertarelli popped up to Geneva to cocktail with the top dogs of sponsor Hublot, whose newest watch, the King Power Alinghi, “represents the savoir-faire and precision of Swiss technology, in common with Alinghi 5, the giant catamaran that was designed and constructed in the Lake Geneva region.”

Note the political craft in that “constructed.”

Meanwhile, Société Nautique de Genève has responded to the Golden Gate Yacht Club’s recent accusations with accusations of their own. The response came, not from Commodore Pierre-Yves Firmenich, but from Vice Commodore Fred Meyer, who is SNG’s America’s Cup Committee Chairman. (Unlike the US system, where it is common to see flag officers automatically rotating upward through three levels of higher office, SNG’s flags run for election for a particular office, and they can stick around. Meyer held the same post in 2007 and made the fall tour that year with Bertarelli as they they tried to enlist Americans to their point of view.) Today’s letter, addressed to GGYC Commodore Marcus Young, says:

“Your accusation against a highly respected sailor [he means Brad Butterworth] is without grounds and very unfair.

“GGYC’s representatives clearly bear the substantial responsibility of the negotiations’ failure. While Alinghi representatives were acting in good faith in Singapore, GGYC lawyers filed a factually and legally baseless motion with the New York Supreme Court on a topic (Constructed in Country) that was a subject of those negotiations. This GGYC court filing was the cause of the failure of the negotiation and is further evidence of GGYC’s bad faith conduct.

“It is not the first time that your representatives show a lack of good faith. On November 9, 2009, your representatives took the opportunity of settlement talks at your lawyers’ offices to serve the new breach of trustees law suit! SNG acknowledges your statement that GGYC would like to negotiate further, and we confirm that SNG would be prepared to do so provided that GGYC withdraws its baseless Constructed in Country motion.”

Which BMOR says they will do, if Alinghi drops its park-in-the-Darsena requirement from the SI’s, for example, and wouldn’t have done had Alinghi signed in Singapore. No one outside a tight inner circle has actually seen the text of the so-called Singapore Agreement that could have resolved this part of the wrangling.

And the play clock is running.

More questions: Could it be that the trimaran guys really would like more time to work on the wing, if only they can force Alinghi to need more time also–to build new sails?

Darned if I know. My plan du jour is this:

See you at VLC baggage claim circa 1240 on Friday, February 5 — Kimball